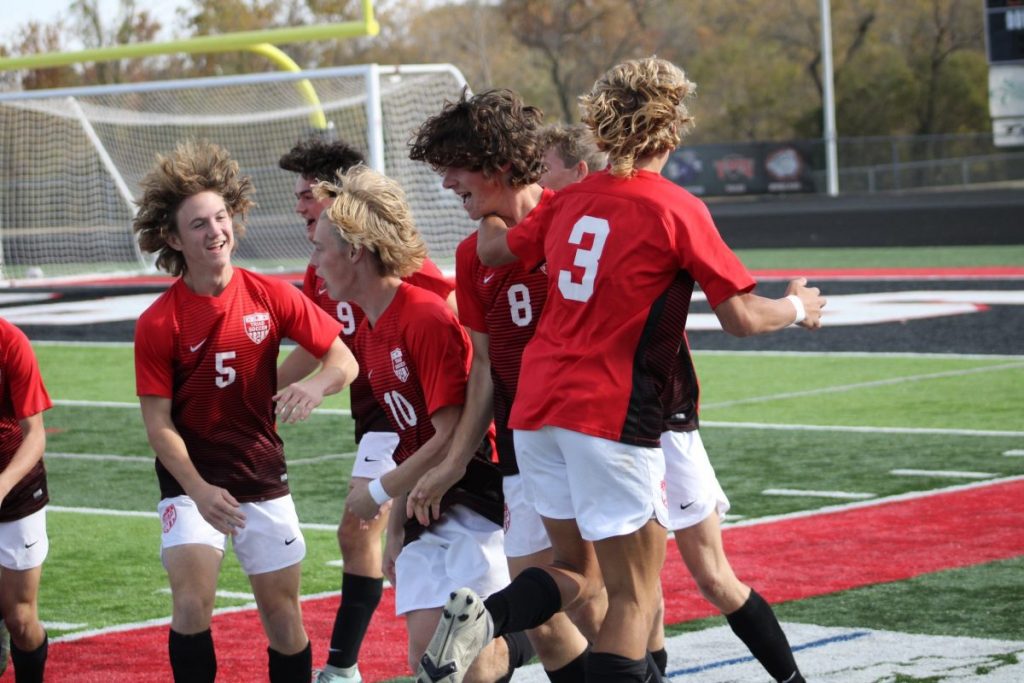 Thanks to a Wyatt Suter goal just 18 seconds into the game, Triad could not have asked for a better start to their Regional final against Alton Marquette. But it was not smooth sailing against the 17-5 Explorers.

A powerful wind benefited Marquette in the opening half and they took full advantage to keep near constant pressure on the Knights. Thanks to several highlight saves from goaltender Max Rader, that was not enough for a first half equalizer.

An equalizer would come however, as the Explorers scored just 10 minutes into the second half. Their game tying score came via a corner kick and a collision that did not earn a whistle.

Two minutes later, Alton converted another goal to go up 2-1.Triad’s postseason continued to tick away, as their goal deficit still stood with 15 minutes to play.

Captain and leading goal scorer TJ Suter was not ready to lose just yet and he headed in a game tying score after a Gibson Hunt free kick traveled around the box.

“It’s just faith in the team. I may be the one getting the finishes, but I don’t score those goals without a total team effort,” TJ Suter spoke of his knack for finding the net when Triad has faced trouble this season.

Suter came in with another critical play with nine minutes to play as he headed the ball into the box. This would set up Porter Reynolds for a lead taking score.

A dagger would be delivered by sophomore Lance Stauffer with under a minute to play, pushing the Knights ahead 4-2.

Coach Jim Jackson was glad to see his team overcome their late deficit, “It kicked in that they wanted to play next week and the kids kept fighting. I couldn’t be prouder.”

Earlier in the week, the Knights opened their postseason with a battle against rival Highland.

Just twelve minutes into the action, Charlie Gentemann raced through several Highland defenders and launched a shot on goal. His effort did not find the net, but Wyatt Suter finished the job as he sent the loose ball into the net.

TJ Suter pushed the lead further after tacking on another first half goal with 13:59 left before intermission. This 2-0 advantage remained at the half.

The Knights continued to pour on the offense in the final 40 minutes. TJ Suter would find the back of the net again, while Drew Neu, Ethan Kirby and Gibson Hunt recorded tallies. Max Rader would finish with a shutout in net for Triad’s 6-0 victory.

Next on the schedule for the Knights is an Oct. 26 trip to Civic Memorial. There, Triad will face off with Waterloo in a key rubber match. The Bulldogs have a unique distinction as the only Class 2A to defeat the three-loss Knights this season.

A win would earn Triad a return trip to Bethalto on Oct. 28. The Knights would face off against either Mascoutah or Civic Memorial for the IHSA Sectional title in that contest.