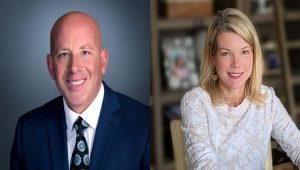 Kris Tharp (left) is being challenged by Erica Conway Harriss (right) for the district 56 senate seat.

Two individuals with a strong presence in Madison County are on the ballot in the Nov. 8 general election vying for the position of state senator for the 56th legislative district. Kris Tharp of Bethalto, the incumbent, is being challenged by Erica Conway Harriss of Glen Carbon.

Running for reelection as a Democrat, Tharp assumed the legislative seat in July of this year when he was appointed to replace Rachelle Aud Crowe who had taken a position as United States attorney for the southern district of Illinois.

Republican Harriss was elected to the Madison County Board, representing its 26th district which includes Glen Carbon, in 2016 and served as the board’s personnel committee chairperson and on three other committees until vacating her seat earlier this year to pursue the state senate seat.

Tharp’s 25-year career in law enforcement has included serving as a captain and jail administrator for the Madison County Sheriff’s Department along with being a deputy commander for the Major Case Squad of Greater St. Louis.

Holding a bachelor’s degree in speech communications/public relations that she received in 1999 from Southern Illinois University Edwardsville, Harriss is a small business owner since founding her own company in 2014 and was communications director for the National Children’s Cancer Society for five years through 2004.

A graduate of the Federal Bureau of Investigation National Academy, Tharp is founder of Madison County Triad, a group which provides support for the elderly and persons with disabilities.

She is the recipient of the Martin Luther King Jr. Humanitarian Award from the New Shining Light Outreach Ministry, a member and youth group leader for Metro Community Church of Edwardsville for close to 25 years and been involved in the Fellowship of Christian Athletes and Compassion International.