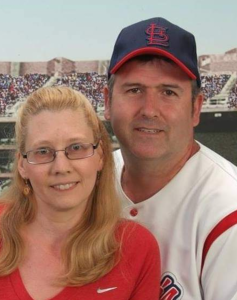 Richard Maedge, pictured here with his wife Jenn, as of Wednesday has been missing six months from his home in Troy. (photo provided by Van Toliver)

Kind, caring, slow to anger –  just a few of the ways family members this week described Troy resident Richard Maedge, who six months ago Wednesday went missing and whose whereabouts are still unknown.

The months since the 53-year-old’s April 26 disappearance from his home on Hickory Street have been very difficult, his wife Jennifer Maedge told the Times-Tribune on Monday. He is a father to three children, two sons and a daughter and is a very family-oriented person, which in his absence has been devastating to his loved ones.

“Since Rich has been missing I have felt alone, but I know I’m not alone,” Jenniefer Maedge said. “This is the hardest thing I am going through. I have been affected mentally physically and financially.”

Troy Police Assistant Chief Christopher Wasser on Monday said the agency was limited in what it could release, as to not compromise the active investigation, but not a day goes by without detectives working on the case. He encouraged anyone with information to reach out.

“We are still working on the case,” Wasser said. “Our detectives work on some aspect of the case everyday. Some of these search warrants and everything take a long time to get back. We want to find him just as much as everybody else.”

Van Toliver, the husband of Maedge’s sister Marilyn, shared additional details this week about Maedge and what the family has learned thus far. Maedge has skills in architecture, building trades and prior to his disappearance worked as a carpenter and handyman. At the time of his disappearance, he was employed by a staffing company in Swansea.

“He was the kind of brother-in-law you’d like to have, because he was a handyman and would come to our house and visit and always wanted to fix something,” Toliver said. “He liked building things.”

On April 26, Maedge got off work about 3 p.m. He was seen about 3:10 p.m. on a traffic surveillance camera heading home from work, Toliver said the family was told by police. He sent a text to his sister Marylin at about 3:22 p.m. that day, which indicated he was pulling in his driveway.

“He got off work at 3 o’clock and they got him on camera at 3:10 p.m. in his vehicle on the highway,” Toliver said. “The last time he texted my wife was about 3:22 p.m. and she thinks he was parking in the driveway.”

From there, Maedge was reported to be going to his father’s (Edward Maedge, now deceased) house directly across the street to work on a deck. His wife arrived home that day about 4 p.m. and at the time nothing seemed suspicious. Maedge’s keys and wallet were left on his kitchen counter and his Dodge Durrango was parked in the driveway, which did not cause alarm as he was assumed to be nearby.

“She thought nothing about it,” Toliver said. “She thought he was down at his father’s house working on the deck.”

As the night wore on, the family’s worries increased. The next morning authorities were contacted, but Toliver said 24-hours had to pass before a missing person’s report could be filed. The report was filed about 3:30 p.m. the following day and police began investigating, bringing a K-9 unit to the home.

“At 3:30 the next day, that’s when they brought the dogs around,” Toliver said. “They told us the dogs did hit on his scent and it ended in the middle of the road, which is right outside his back door. The police said the scent went from the back door to the center of the road there and that’s where it ends.”

And that’s where the trail seemingly goes cold.

Toliver said K-9 units the next day conducted a search of Maedge’s father’s house and a wooded area nearby, but that yielded no clues. His cellphone, which Toliver said has not been located, was believed to be on his person.

Police used geofencing, Toliver said, a vast network search for an active communications device, but that offered no new evidence either. Some have speculated Maedge may have left of his own accord, but that is not a possibility given his brother-in-law’s character.

Maedge would not have missed his father’s (Edward Maedge) funeral in August and given his kind nature it’s difficult to imagine he had any enemies in the community, Toliver said.

“So laid back and not worried about anything, that’s Richard,” Toliver said. “I’ve never heard Richard raise his voice, ever, and I’ve known him for 42 years.”

Anyone with information is encouraged to contact the Troy Police Department at 618-667-6731.