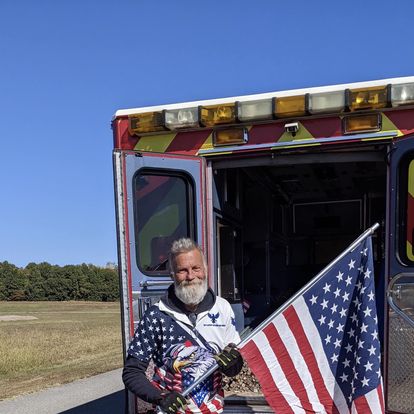 Jeff Hastings holds the Stars and Stripes behind and emergency vehicle

How do we as a nation truly recognize veterans of the United States military who have made the ultimate sacrifice for their country?

With pageantry and honor, is the answer. And that is done by the people behind the scenes, the dedicated volunteers that offer up their time and effort.

Jeff Hastings and Jim Gilliland are two people responsible for making sure that our heroes are never forgotten and are honored with the pageantry and respect that a hero deserves. Gilliland is one of the two drivers for the American Veterans Traveling Tribute that brought the Vietnam Wall to Troy.

Gilliland has been driving the memorial for AVTT for little over a year. He has driven to about 20 shows in different cities. Gilliland began driving the wall as a favor to an Army buddy.

“We have two walls that travel the Lower 48, nine months out of the year,” Gilliland said. “The other driver’s name is Wes Shivers, he and I served in the same Army unit together. He called me up and asked me if I wanted a job.”

“I love to drive and being a veteran too, I love meeting all of the patriotic people that we see when out on the road,” he said.

One of his truest pleasures since driving for AVTT, is just simply lending ear to those veterans that want to share their story with someone who understands.

“One of the special things that I get to experience when I get to do these events is that a lot of Vietnam veterans want to sit down and just talk to me and tell me their story,” Gilliland said. “I think a lot of them are alone now; and by themselves and they don’t want to tell their story to a civilian because they just wouldn’t understand.

Hastings is the president of “The Flagman’s Mission Continues” and is responsible for continuing the legacy of Larry “The Flagman” Eckhard.

A sympathetic patriot, Eckhardt started his mission around 2006, after attending the funeral of a fallen soldier. He didn’t remember the soldier’s name, but did remember feeling heartbroken at the fact that so little was done to commemorate the man’s sacrifice in his small western Illinois town of Aledo, also the town of Eckhardt.

A few days after that Eckhardt bought 50 flags, each three by five feet in size, and started posting them in small towns in Illinois when funerals were held for local servicemen and women. Eckhardt’s operation swelled to 3,000 American flags, posting flags at nearly 200 funerals, visitations, or similar memorials.

Eckhardt had become ill in 2019, and lost his battle with thyroid cancer on March 30, 2020. He left the mission in the good hands of a good friend Jeff Hastings, a 20-year veteran of combined service between the active-duty Air Force and Air National Guard.

“I started with Larry about 14-15 years ago and we became good friends over the years,” Hastings said. “I was hoping this day wouldn’t come, that I would take it over, but I did. I always told Larry if that time ever did come, I’d be honored to do that. I enjoyed doing that with him. He was my friend and to carry on his mission is an honor.”

The Mission was in a bit of disarray when Eckhardt died, but Hastings stepped up and turned the operation around, officially turning the Mission into a non-profit, allowing for the organization to continue.

“Larry did all of this by the seat of his pants,” Hastings said. “When Larry passed away he was $15,000 in debt. He paid for everything out of his pockets. He couldn’t solicit donations because he wasn’t legally an organization. The first thing we did, after he died, we started a fundraiser to pay off his debt, so that his family wouldn’t incur it.”

“The Flagman’s Mission Continues” purpose is to honor the service, lives and sacrifices of the men and women that have worn the uniform. This includes providing patriotic and educational information and pageantry for civic, military, and community funerals, parades, or patriotic events.

The Mission and its following of volunteers were responsible for the pageantry of over 1500 American flags that flew during the presentation of the traveling tribute to the Vietnam Wall, this past weekend at Truck Centers.

Currently the Mission does 40-45 funerals a year and is able to set up a 16-mile funeral procession. The organization covers a 400-mile radius, having served communities in Iowa, Kentucky, Missouri Arkansas, and Illinois. The organization gives communities a way to pay homage to their fallen heroes.

“It gives communities a way to pay honor to a fallen hero from their hometown,” Hastings said. “The community comes out and people who have never heard of the particular hero that has died still show up because it’s the right thing to do. We charge nothing. We operate strictly off of donations and most of our donations come from the volunteers that show up in these small towns.”

“The appreciation from the families of the fallen soldiers is all the pay I need” he said.

“Hero Down, Flags Up” is the war call for volunteers of the Mission to come help set up and take down. Registered volunteers would get a no-reply text from Hastings himself, giving them a time and location of the event. There‘s no commitment volunteers can come and set up or take down or they can do both.

“We also do flag missions for police officers, firemen, and first responders, killed in the line of duty,” Hastings said.

“The Flagman’s Mission” is the only organization in the country that actually takes flags to communities and gives them the opportunity to honor their fallen heroes. They serve the whole states of Illinois, Indiana, and Missouri, as well as parts of communities in Wisconsin, Iowa, Kentucky, Tennessee, Arkansas, and Kansas.

All donations are used to finance the organization by paying for hotels, vehicle maintenance, fuel costs, insurance and flag  management. The Mission spends up to $10,000 a year, just on replacing flags.

“The main thing that loved ones and surviving family members of these heroes that are killed in the line of duty or die in action want is for their loved ones to be remembered,’ Hastings said. “The phrase ‘Remember, Never Forget’ is out of respect for the surviving members.”