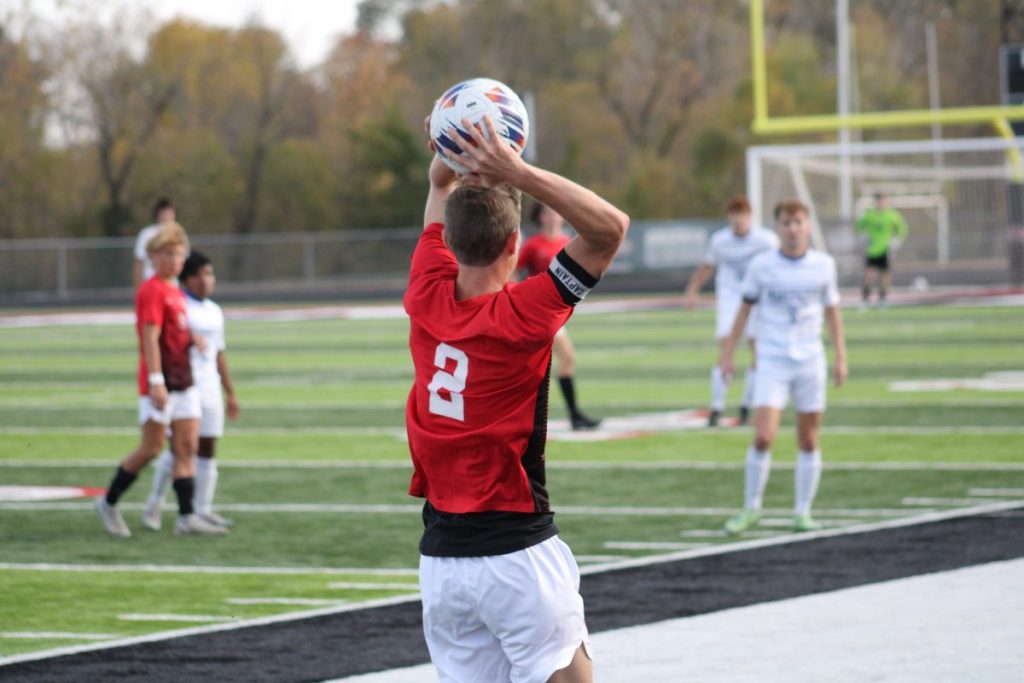 Jake Stewart had a career day to lead Triad to a 4-1 decision over Waterloo.

The senior captain recorded his first stat 28 minutes into the action, when he launched a throw in that fellow captain TJ Suter headed into the net for a 1-0 advantage.

Stewart set up another goal for the Knights, this time on a live ball. The senior raced down the end line before finding Wyatt Suter crashing towards the net. Suter converted the cross with a redirect in the air just before the goaltender could snatch the ball.

With seven minutes left in the half, Stewart was involved in another scoring play. This score came after Gibson Hunt launched a corner kick and Stewart booted it into the net after one touch.

The Knights would also strike first in the second half. Stewart converted a penalty just under the crossbar for this tally, marking his first career game with multiple assists and goals.

Waterloo earned their lone goal of the night later on via a penalty kick of their own.

Following the postseason victory, Triad Coach Jim Jackson spoke of Stewart,“He’s one of the best players in the state. He’s just dangerous in the air with throw-ins and shooting. Defensively, we pushed him in the backfield after they got that goal, so he’s a complete player.”

Triad’s sectional semi-final win was not without struggle however.

The Knights dominated the opening minutes of the game, earning several corner kicks and throw-ins from deep in Bulldog territory. But they could not find the net.

“Once we got that first goal, it seemed like it turned in our favor. But the first 10 minutes, we were all over their goal and we just couldn’t score. Sometimes that happens,” Jackson discussed their dominante, but scoreless start.

Waterloo also had several chances to take an early lead. In addition to saves from goaltender Max Rader, Aiden Baker chased down a goal-to-go situation to keep the 0-0 tie intact.

Triad should expect more offensive pressure during their next matchup, as they will battle the hosting Civic Memorial Eagles in the sectional final on Oct. 28.

Headlining the Eagles lineup is prolific goal scorer Bryce Davis. The senior has 61 goals to his name this season, a mark that places him 10 away from the state record.

In their previous meetings this year, Triad has done as good a job as anybody against Davis, holding him to one assistin two meetings. The Knights won both of those meetings, coming by scores of 2-1 and 1-0.

Coach Jackson previewed their rematch against the Eagles and Davis, “We’re going to come to play and do some things that we usually do and maybe change some things up. He’s a good player and they’ve done a great job the last few years.”