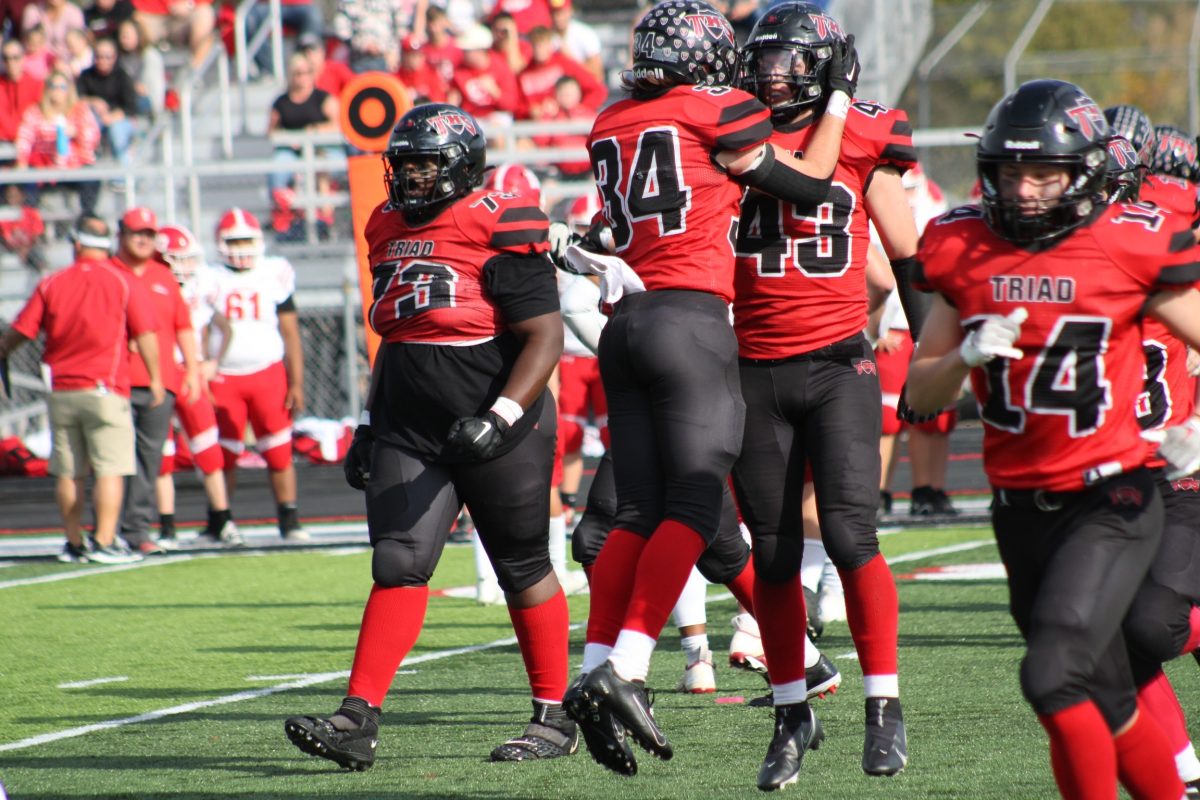 Triad football finished their season with a 7-3 record, following a 27-14 loss to Centralia in the postseason.

The story of the first half was Triad’s defense making several key stops.

Centralia marched downfield on the opening field, reaching well into Knight territory. But a hit on the quarterback knocked the ball loose and a Donny Becker fumble recovery ended their early scoring hopes.

The next three Orphans drives would end with a missed field goal, a turnover on downs at the Triad 33 and a punt. Later in the second quarter, the defense would be challenged again after a fake punt came one yard short of the sticks, setting Centralia up at the Triad 42.

The teams traded subsequent punts, but the Knight’s kick was blocked. But even after starting at their own 34 yard line, Triad’s defense earned a turnover on downs in just four plays.

A Centralia interception return to the home team’s 16 a few plays later would start their third consecutive drive in Triad territory. This led to the first score of the game after Centralia converted a fourth and goal. A subsequent extra point gave the Orphans a 7-0 advantage.

After halftime, the Knights seemed like a new team.

Their offense crossed midfield with a 36 yard keeper from Nic Funk and Jason Randoll punched in an opening drive touchdown from the 20 yard line. Jake Stewart tied the game at 7-7 with an extra point.

Having 75 yards to work with, the Knight defense earned a quick stop on the Orphan’s first possession of the half.

It would not take long for this to convert into points, as Koen Rodebush fielded a wobby punt near the Centralia sideline and would find the other sideline enroute to a 55 yard scoring return. Stewart’s trusty leg pushed Triad ahead 14-7.

Momentum seemed fully swung in the host’s direction following another quick stop and an offensive drive nearing midfield. But then, disaster struck.

A loose ball in the backfield was scooped up by Centralia defensive back Amir Johnson, who would take it 55 yards to the house. A subsequent point after try knotted the contest at 14-14 with two minutes remaining in the third quarter.

The fumble bug bit the Knights on their ensuing drive as well, setting up the Orphans at their 27 yard line. After the drive stretched into the fourth quarter, Centralia scored on their second fourth and goal of the day. A tipped extra point attempt kept the score 20-14.

Triad managed their next offensive possession without a turnover, but were quickly forced to punt. This set up a first play, sixty yard touchdown run for the Orphans. The ensuing extra point made the score 27-14 with eight minutes to play.

The Knights responded with a lengthy drive that included a fourth and five conversion where Tashon Crockarell evaded multiple tackles for the first. As they crossed midfield, Triad was set up with a first and ten from the Centralia 40 yard line.

The offense picked up this first down once, but it was called back for holding. Later on third and one, they picked it up with a 10 yard quarterback sneak, but a rare assisting the runner call negated it again. They ultimately turned the ball over on this set of chains.

Triad’s defense would force a three and out for one last chance, but a toe tapping interception from Centralia allowed them to run out the clock.

The 6-4 Centralia Orphans advance to round two to host Morris next week.

Coach Bassler spoke about the Orphans, “They’re tough every play and they’re very athletic. They’ve got all kinds of kids going both ways and they’re a pretty gutsy group.”

Finishing at 7-3, the Knights picked up plenty of accolades along the way. The team finished second place in the Mississippi Valley Conference, ahead of Mascoutah and Waterloo teams that both have seven wins and counting.

Triad’s scoring leader for the season was Funk, who finished with 6 rushing touchdowns to go with 13 scoring tosses. He also finished the regular season with 1045 passing yards and only one interception.

Fullback Drake Keller led the team in regular season rushing, finishing with 100 carries, 532 yards and 3 scores. Jason Randoll was also key to the rushing game with 403 yards and two touchdowns off 59 carries.

In the receiving game, Tashon Crockarell led the way with 355 yards and 5 scores. Randoll, Ryan Hazelwood and Isaac Ackerman all eclipsed 100 receiving yards as well.

On the other side of the ball, Jarret Del Rosario led the way with 83 total tackles. Bret Beckmann and Donny Becker added respective totals of 60 and 51.

In terms of turnovers, Del Rosario and Carter Vandever led the team with two fumble recoveries. Koen Rodebush led the interception department with four and Braden Carlson tacked on two.

Coach Bassler remarked on his team’s seven win year, “After week five, we really got it rolling and played some quality football teams and beat them. We got ourself into this position. It was kind of a tale of three seasons with the first half, the last half and then the playoffs.”