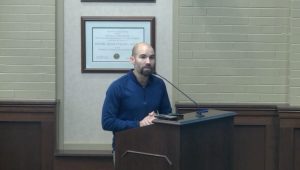 Kevin Wrigley speaks at the Collinsville Council meeting about the home-rule proposal on the Nov. 8 ballot.

Opponents of the Home-Rule proposition on the Nov. 8 ballot spoke at length Monday at the bi-monthly meeting of the Collinsville City Council.

Two Collinsville residents took to the podium to speak on their displeasure of the home-rule status and its effect on the property taxes in the city and the council.

Kevin Wrigley spoke about property taxes and the lack of transparency by the Council. He accused the Council of using scare tactics in order to get workers onboard and said the council was not transparent in telling what would happen if home-rule was to expire.

“I’m here to ask you guys, two weeks before the vote on home-rule, to please bring some transparency to the issue of what will happen if home-rule was eliminated,” Wrigley said. “It is actually scaring the employees, because apparently they are out there telling the public that they are going to lose their jobs if we don’t keep home-rule.”

Wrigley said he has studied other communities which have gone through the home-rule debate.  Councils in those communities have brought the public into the process and had workshops showing what, if anything, could be cut or what revenues would be replaced by things like a non-home-rule sales tax.

He also blamed the council for telling half-truths about Collinsville having the second lowest property taxes in the region, as well as unnecessarily buying up property on Main Street. He said the amount has gone up every year for the last five years.

“I know it’s been said many times by the councilmen that we have the second lowest property tax in the region,” Wrigley said. “It fails to state that O’Fallon is lower than ours, as well as Shiloh, but what also has been failed to mention is tax levy, which is the actual amount that is taken out of the resident’s pocket via the real estate taxes.”

Phil Astrauskas also spoke to the Council in opposition to the home rule measure. He said he doesn’t believe a board of three should be able to dictate the future of over 25,000 citizens.

“… one thing that I’ve tried to promote from years and years ago, is to increase the board size,” Astrauskas said. “At this point now, three people decide the fate of 25,000 people, and if it involves raising taxes, Tax increment financing funds anything the city spends. I think something should be adopted so that more people are able to comment on it.”

He also commented on the rise of property and sales tax, saying that the home-rule status is being abused.

Council members offered rebuttals, starting with Councilman David Jerome arguing against the speakers’ claims about a lack of transparency.

Jerome said the sales tax that’s been growing since 2005 and revenues are currently up to $7 million, which is supplementing the property tax. He said while communities around Collinsville have had to raise their property tax, the city has not. Without home-rule in place, the brunt of taxing would fall on the property owners and that $7 million would fall off the city’s budget.

He also stated that it would be disastrous here because of the effect it would have on city employment and employees as well as capital improvements that are in the works.

Council members Tony Hausmann and Donna Green said opponents are using diversionary tactics, as well as scare tactics, to confuse the citizens of Collinsville about home-rule.

“There’s also been comments made here and online that are mere diversions and have absolutely nothing to do with home-rule, they range from where does one live, the size and construct of the Council,” Hausmann said. “The other thing that completely baffles me is why one group, whose business hinges upon residents in these towns, is doing so much to alienate their future customers.”

Councilman Green took issue with statements made by Wrigley, saying they were without fact.

She also explained the change that the city has undergone over the years.

“A couple of things that you mention up here tonight is the lack of transparency and I take a bit of issue with that,” Green said.  “As I sat where you are from 2014, until I ran for city council in 2017, there is a vast difference in what we would call transparency. I don’t think you have a clue about the lack of transparency that used to be in this city, that no longer happens. I never hear anymore that people don’t want to move to Collinsville.”

Councilman Jeff Stehman offered that the opposition is a special interest group of realtors based out of Springfield, like the Greater Gateway Board and the Realtors Association that pump tens of thousands of dollars to distribute mailers, flyers, and emails to confuse the citizens of Collinsville.

“My point being, get the right information, dig into it and find out the motives of the opposition,” Stehman said.