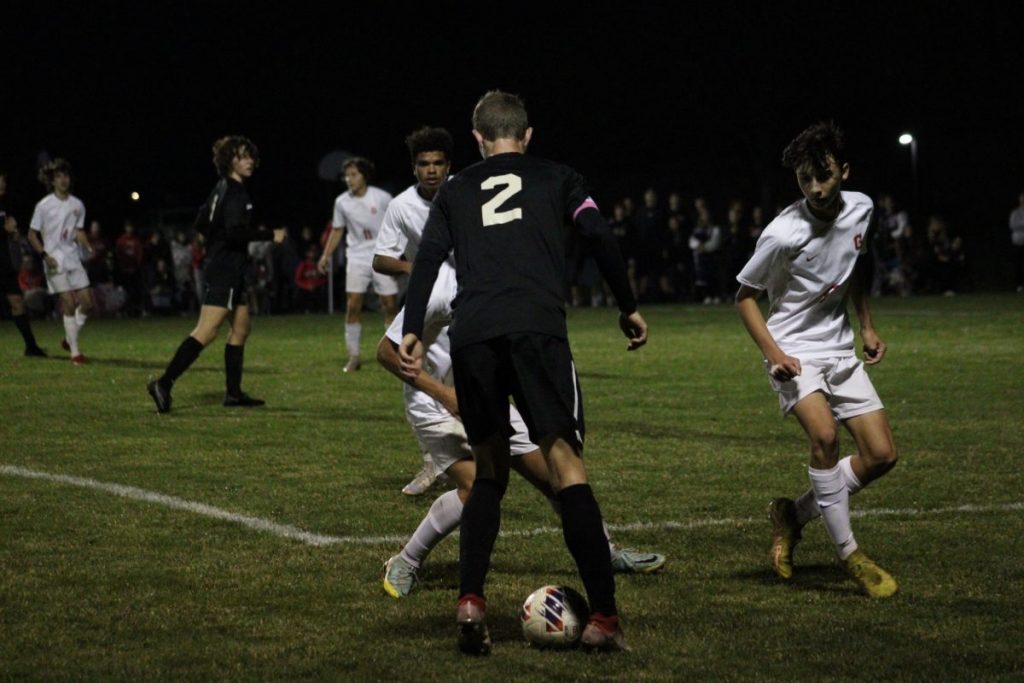 Chatham’s goalkeeper falls on a Triad shot in the first half.

For the third postseason in a row, Triad soccer found themselves in the Super-Sectional round. This season’s matchup to advance to state came on Nov. 1, as the Knights battled it out against the Glenwood Titans.

The game, held at Rochester, was the first meeting between the two teams since 2019. Triad won that contest 2-0 for a Sectional title.

Chatham struck first this time around, with their tally coming twenty three minutes into the action. Their early lead came at the hands of Eben Reed, who ran by multiple defenders before converting a goal to go.

With their early lead, the Titans began to play defensively and frustrated several promising attacks from the Knights.

Triad’s pressure began to swelter further in the second half as they were awarded a free kick just outside of the box. Junior Gibson Hunt took the opportunity and booted it out of the keeper’s reach, but the post saved Chatham’s shutout.

A few minutes later, the Knights seemed set for their first score as a shot surpassed the Titan goaltender. This time around, it was a Chatham defenseman that denied them after using his head for a goal line clearance.

Finally, Triad lit up the scoreboard with 21 minutes to play. This equalizer came from Landen Travnicek, whose shot bounced off the goalie’s mitts and into the net.

“It was a flurry in there and we didn’t know Travnicek got the goal until they announced it,” Triad Coach Jim Jackson spoke of the key goal.

Possession became more balanced with both teams knotted at 1, but legitimate scoring chances became harder to come by. That’s when the Titans blasted a shot from deep.

From around 45 yards out, the ball lasered towards the net. Triad goaltender Max Rader managed to get a hand on the ball, but the laser still found the net.

Playing from behind again, the Knights’ eyes flashed near the seventy minute mark as the Titans committed a clear hand ball in the box. Unfortunately for them, the officials missed the foul and no penalty kick was rewarded.

2-1 would prove to be the final score, ending Triad’s season at 20-4 overall.

The game was the final outing for the Knight’s senior core of Aiden Baker, Gage Hartmann, Ethan Kirby, Max Rader, Jake Stewart and TJ Suter, who reached the Super-Sectional match every postseason of their high school career.

Coach Jackson spoke earlier in the season about the six seniors who have won 83 games over the past four years, “Great group of six young men that have you know worked hard and done the things we’ve asked them to do. TJ and Stewart are captains and great leaders this year. Then you’ve got the other guys that just work hard and do the things we ask. They’re a great group of kids.”

Following their victory over Triad, Glenwood continued their march through the postseason. They defeated Grayslake Central 1-0 in the semi-finals before losing to Peoria Notre Dame 3-1 in a windy state championship match.