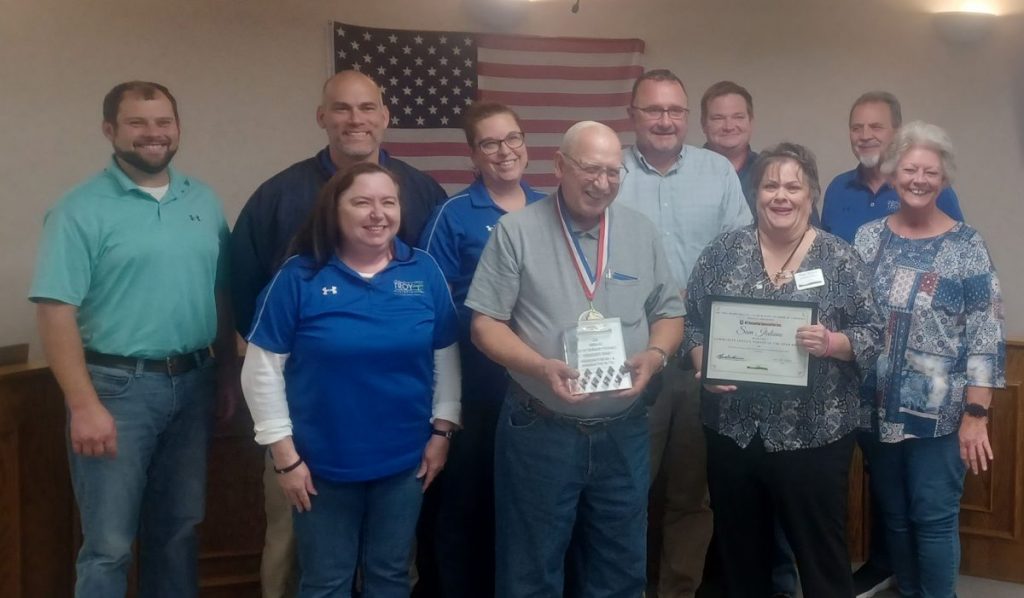 Council member Sam Italiano, center holding award, is recognized during the Monday city council meeting by the Troy/Maryville/St. Jacob/Marine Chamber of Commerce for a lifetime of contributions to the community. Chamber director Dawn Mushill, right of Italiano, presents the award.

Troy City Council kicked off Monday’s meeting with a recognition of council member Sam Italiano by the Troy/Maryville/St. Jacob/Marine Chamber of Commerce.

Chamber director Dawn Mushill presented Italiano with a plaque and certificate recognizing his contributions to the community over the years. A Vietnam veteran, Italiano has served on the Park Board, as an elder at St. Paul’s Lutheran Church and is currently the council’s longest serving member.

Italiano is also the owner of A1 Security Specialist, which he retired from Oct. 31 following its sale.

“I am surprised,” Italiano said following the recognition. “I’d like to thank the public and all the businesses, all my coworkers and everyone else for everything they have done. It wouldn’t be possible without them.”

In other actions taken during the meeting, the city has renewed its municipal electricity aggregation program, but due to a new provider, residents will see an increase beginning in February 2023, keeping inline with trends of higher rates nationwide.

Prior to February 2023, residents will receive letters from both Ameren and Constellation NewEnergy explaining the changes. No action is required by residents, according to meeting documents.

Council members voted to extend for 12 years an existing franchise agreement with utility provider Ameren. The agreement was first put in place in 1991 and authorizes the company to serve as a utility provider and conduct maintenance and construction related to the service.

The city collects a franchise fee through the agreement which in the first year is $29,000 and increases to $50,000 over a five-year period. After five years, if population increases or decreases by 3% the city can renegotiate the payment.

Also related to utilities, council members enacted an ordinance governing right-of way and construction by providers. The ordinance passed Monday adds a chapter to city code which details policies and procedures for constructing facilities on rights-of-way.

Another ordinance passed at the meeting authorizes Collinsville Bank to issue on the city’s behalf a letter of credit to Ameren in regard to the placement of license plate readers in some locations in the city.

Ameren made the request for the $5,000 Letter of Credit from the City’s financial institution for each Ameren utility pole where a reader is attached. Police say the devices are helpful in solving crimes committed in Troy.

The city plans to reapply for surface transportation project grant funding for improvements to Bouse Road. A previous application scored the road high enough for funding, but Riggen Road scored higher and was approved by grant administrator East West Gateway.

A $15,000 Madison County Environmental Grant through Madison County Building and Zoning was received for an ongoing project to alleviate flooding in the area of Creekside and Avalon drives. A retention pond was recently constructed near CA Henning School and remaining work will focus on rerouting the storm sewer. Total cost of the project is $38,000.

With the county now providing more than $400,000 in grant funding, plans for a roundabout at the intersection of State Highway 162 and Old Troy Road are moving forward. Public works met with Lochmueller Engineering on Nov. 1 and a schedule and design is expected by the end of the month. Most recent cost estimates are about $1.5 million for the project.

Work is progressing on the Wynona Trail, a connector between Paul Simon Park and West Clay Street. In September, city engineers completed surveys and topographical maps and the design is expected to be completed by the end of March.

The project is funded through a $220,000 Metro East Park and Recreation District grant and is expected to be completed in 2023-2024.