Don Nevinger holds a photo of himself taken during his service in the early 1950s. Nevinger was one of several residents of Cedarhurst Assisted Living who this week shared some details about their service in honor of Veterans Day.

In honor of Veterans Day, the Times-Tribune this week met with several veterans who served in the U.S. Armed Forces and now call Cedarhurst Senior Living in Troy home.

From World War II to Korea to the height of the Cold War, some served in peacetime and some in fighting so harrowing that years later the details are still too difficult to discuss. Here are some highlights from the interviews.

It’s hard for 97-year-old Kenneth Inman to recall the details of his service with the U.S. Army in the aftermath of World War II.

Inman arrived in Europe to a world in disaster. Due to his experience with horses, his orders were to report to the 10th Mountain Division, whose leader was none other than future U.S. Senator and presidential contender Bob Dole.

While Inman says he did once talk to Dole, due to a serious illness Inman never got to serve under him or with the division.

“I never actually served with them,” Inman said. “When I reported there, I stayed overnight and they said we will get your assignment tomorrow. The next day some guy says you’re going to go on sick call. And I ask why is that. He says ‘I had to sleep with you and you were up and about all night,’ but I do not remember any of that.”

Inman said a medic walked by the next morning and Inman told him he needed to go on sick call. The medic then took his temperature and after seeing the results, shook his head and ordered Inman to the hospital.

It was just after World War II when now 94-year-old Don Nevinger received a draft notice. Like many high schoolers in the same situation, he admits he was not looking forward to serving right after one of the most brutal conflicts in history had just ended.

“Harry dropped the bomb already, but they hadn’t stopped the draft,” Nevinger said. “So there were about six to eight of us in my senior class, I went to school in Collinsville, and they just said you don’t have to go. So that tickled me, I wasn’t anxious to go.”

While conscription ended in 1946 due to an excess of military personnel following World War II, it resumed again in 1948. Nevinger said given his close call the first time, he knew he would be called up again and decided to enlist voluntarily.

“I was stationed in Fifth Army in downtown Chicago and I was running IBM machines,” Nevinger said. “I got married while I was in to my high school sweetheart (Jane). Well I thought I was going to be stationed in Chicago, but in 1949 they came and said ‘Well, we got too many. You can take a convenience of the government discharge. So I said, fine with me and I got out.”

Nevinger’s civilian life was short lived, however. The following spring came the Korean War and once again he enlisted to serve his country.

Nevinger escaped the fighting of the Korean War, but James Price, 93, did not. Serving in the U.S. Army from 1951 to 1953, Price was a machine gunner in some of the worst of the conflict. He lost several friends right before his eyes and says the war is too difficult to discuss.

“I won’t talk about the conflict,” he said. “I’ll be honest, I never expected to come back. I didn’t expect to come home.”

But he did, saying the fist thing he did upon returning stateside was to call his family. When he arrived home to St. Louis he was happy to meet his son for the first time, who was just over a year old.

“They said go to your daddy,” Price said. “He ran to my picture. He was about a year-and-a-half old and he didn’t know me. He knew my picture.”

John Sizemore, 88, also served during the Korean War with the U.S. Air Force, but was not in country. He worked as a radio operator with 580th Air Resupply Squadron in North Africa. He tread ground in Libya, Tripoli and Saudi Arabia, where he shared an interesting story about his first time in the Islamic nation.

“King Saud had a beef about Time magazine,” Sizemore said. “They had written an article about him or something. So I’m flying in and I’ve got tons of magazines, including Time magazine. I was told I couldn’t take it off the plane.”

“No whiskey, no beer and no Time magazine,” he laughed.

After graduating Collinsville High School, John Wagner, 84, joined the U.S. Air Force. It was during the days following U.S. fighting in the Korean War. He was stationed at Osan Air Base in the south, where he shared an interesting story about a time he was working security and had a bit of a scrum with some of his fellow soldiers over a password.

“One time the pilots had just come in from training,” Wagner said. “I was on guard duty on the flight line and it was a Korean Driver. He said he’d come to pick these guys up and he had to have a password, but he didn’t know it.”

Wagner told the driver he could not pick up the airmen until he provided the word. With limited English, the driver provided several words, none of them correct. After about 20 minutes, the pilots were ready to go back to headquarters and getting anxious.

“I said I can’t let this guy pick you up until he gives me the password,” Wagner said. “They said ‘we’ve got to get back to headquarters.’ I said well I don’t care. Until they give me the password they are not getting out of that truck or taking you anywhere.”

A military policeman soon arrived on the scene in a jeep. He asked Wagner what was going on and Wagner explained the situation. In an effort to diffuse the situation, the MP said he would provide the password, but it too was the wrong one.

“I said buddy that’s the wrong one,” Wagner said. “Nobody is taking anybody anywhere. It was pretty cold at the time too, it was winter in Korea. We argued back-and-forth. They can’t believe I’m doing all this. He said ‘well I’m an air policeman.’ I said I don’t care who you are.”

“Finally, he went back to headquarters and got the regular password. I said you finally got it right didn’t you and let them all go,” Wagner laughed.

From 1966 to 1970, during some of the most tense years of the lengthy Cold War, Tom VanDeVelde served in what he referred to as “Uncle Sam’s Canoe Club,” which was the U.S. Navy. The last three years of his service he spent as a flight engineer on Lockheed’s P-3 Orion, a sub-hunter class plane.

“It was quite an experience,” VanDeVelde said of his time in the Navy. “It was the best four years of my life.” 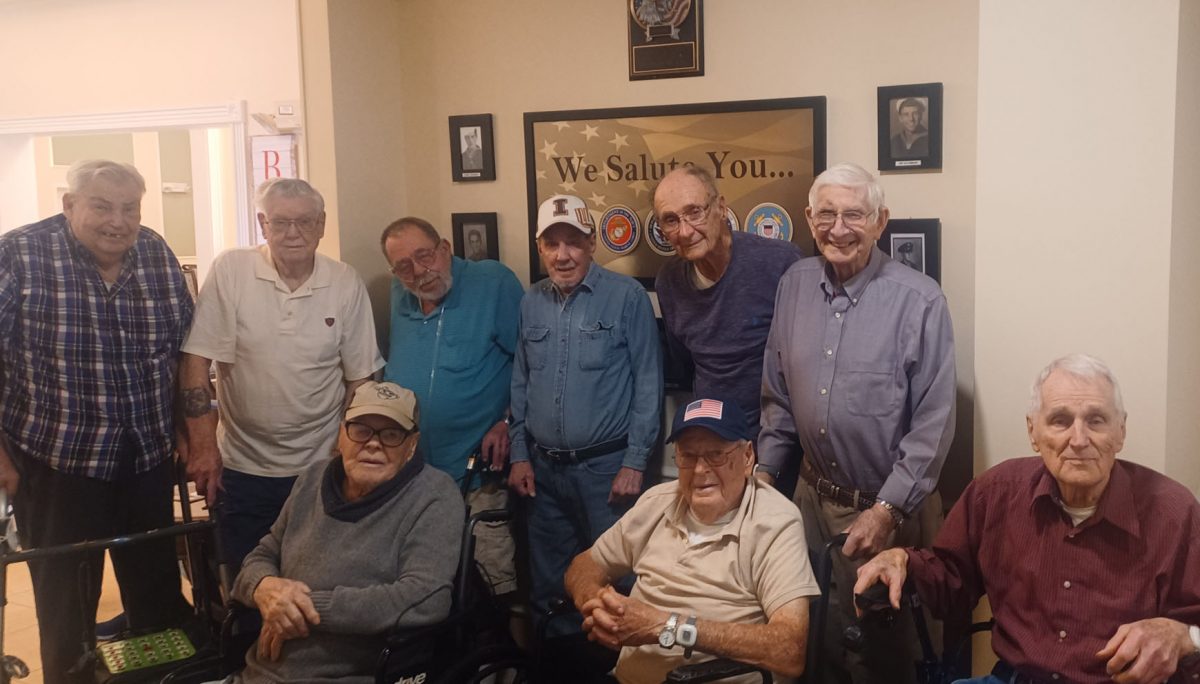