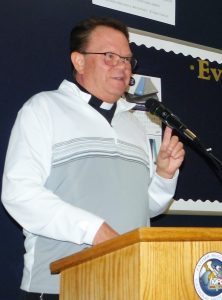 In order to accommodate growing student population, Father McGivney Catholic High School in Glen Carbon it is moving forward with expansion plans that have been delineated in two phases.

About 40 people were present Monday night at the school to hear a presentation concerning the need for creating additional room on the campus property, something being completed, in part, this week with the finishing work on a larger parking area.

The other major component of the first phase of the expansion concerns a larger “commons” facility area, measuring 7200 square feet, which will provide space for up to 400 people to gather, while allowing more room in the building for additional offices, storage and added classrooms, to be completed by October of 2023 if all goes as expected.

These aspects of the first phase of the expansion, including $420,000 for the parking lot, comes with an estimated cost of $3.2 million of which $2.1 million has already been pledged by six families. School officials are seeking support in the form of the remaining $1.1 million.

Student enrollment at FMCHS, celebrating its 10th year in 2022, has grown since opening and since 2015 when there were 108 attending classes. There are now over 300 students including an all-time high number of freshmen enrolled, 90.

Should that total indicate a trend to occur in the years ahead, and the officials speaking about this matter offered no reason to doubt it, something has to be done to the property to adequately handle the load.

The presentation Monday stressed how the additional students coming to FMCHS necessitate both more classroom space plus somewhere to store materials which are now crammed in stairwells and every other available open location.

As an example of the situation being faced, Father Goeckner explained that the room where Monday’s meeting was held, basically filled to about three-quarters capacity by those in attendance and the school officials there, is the same location where 300 students are passed through for their lunch over a span of two-and-a-half hours.

Phase Two of the expansion outlook consists of a larger chapel in the commons area, so that masses can be held weekly instead of monthly as they are now, and a bigger gymnasium, a dedicated space (auditorium) for the performing arts and a much broader athletic complex to include tennis courts, a track going around the soccer fields, bleachers and much more.

A video and PowerPoint presentation, which can be made available to anyone wishing to see them, were utilized Monday evening to underscore some of the information that was shared for everyone.

Halbrook mentioned that there is an online pledge form which can be used to help support the expansion effort plus the school will be sending out about 1500 letters calling attention to the campaign, according to Villhard.