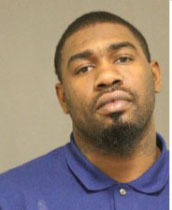 Illinois State Police are asking the public’s help in locating a Maryville man wanted for murder.

St. Clair County State Attorneys in August charged 36-year-old Jermany Rickman with first degree murder and unlawful posesison fo a firearm by a felon. At the time of this writing his whereabouts are unknown, according to an ISP news release.

Rickman is accused of killing 30-year-old, Demond W. Steward, of Cahokia Heights, on Aug. 13 in the parking lot of the Ivy Ultra Lounge in the 900 block of St. Louis Avenue in East St. Louis.

At the time of the incident, Rickman was on federal probation, which has been revoked. A warrant has been issued for his arrest in that matter as well. U.S. Marshalls are offering a $2,000 reward for information leading to his arrest.

ISP stated in the release that Rickman should be considered armed and dangerous and should not be approached. Authorities ask anyone with information to contact Crimestoppers by phone at 1- 866-371-8477 (TIPS) or visit stlrcs.org/. Witnesses can remain anonymous.