It all began in November of 1989 at the Vienna High School gym. 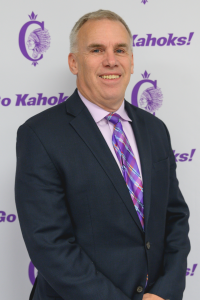 That victory was the cornerstone for a career achievement some 34 years in the making.

When Lee and his Collinsville boys team play their sixth game during the 2022-23 season it will be his 1,000th game as a high school varsity basketball head coach. Assuming everything goes as scheduled, that game will be in Collinsville on Dec. 6 against SWC rival Belleville West.

“The first thing it means is that I’ve been doing it for a long time,” said Lee who entered the IBCA Hall of Fame in 2011. “I remember when (former Okawville coach) Dave Luechtefeld coached his 1,000th game (during the 1997-98 season) and I thought, ‘wow, I’ll never do that,’ I guess here I am. It’s really hard to believe.”

Additionally, when his CHS team wins their fourth game this season, it will be the 700th time one of his teams has won a basketball game. Currently, they have won 696 and lost 298.

According to the IHSA website that will make him only the 22nd coach in the history of high school basketball in Illinois to reach the 700-win plateau.

He is just behind the legendary Dolph Stanley who is known for his Taylorville team of 1943-44 that went 45-0. This accomplishment will put Lee 111 wins behind Arthur Trout of Centralia lore and 92 behind the man he lives in the shadow of, Vergil Fletcher.

Other recent coaching giants on the list above him include Luechtefeld, Dick Corn of Pinckneyville, and Dennis Rueter of Waterloo (Gibault).

“I don’t really put myself in there,” began Lee. “It’s kind of hard to fathom where I’m at. I know some of those guys. I’ve coached against Bob Dallas and Dick Corn. Those guys are right ahead of me in the 700s and a few others that are on there. It’s hard to believe.”

He is well behind the all-time coaching wins leader in Illinois Gene Pingatore of Westchester (St. Joseph) who amassed 1,035 victories during his career.

While he was attending SIU-Carbondale to finish his bachelor’s degree he became an assistant coach for his father, IBCA Hall of Fame coach David Lee, at West Frankfort High School.

From there he spent a year as an assistant coach for Mitch Haskins back at Rend Lake before landing the varsity boys basketball job at Vienna.

He spent two years in Vienna and collected 39 wins. In fact, he still holds the coaching record for career-winning percentage at the school. He won 72.2% of his games there.

He moved on to Nashville where his teams won 426 contests over 18 years and won 20 or more games 15 times.

Finally, he became the coach at Collinsville where he enters his 14th season with 231 victories in the ultra-competitive Southwestern Conference.

While Lee believes the SWC is his most competitive stop during his career, he still has great respect for his days at smaller schools.

“It’s all basketball, there’s not that much difference,” said Lee. “There are talented players in (Class) 2A. Probably in 2A, there were games where we knew we were going to win but we don’t have that in Class 4A hardly ever. That’s probably the biggest difference.”

Regardless of the caliber of the player he coaches, Lee has always emphasized a couple of lessons he has learned from his Dad.

“Practice intensity that doesn’t change. I don’t care what level you’re playing or what school you’re at. If you don’t practice with a certain level of intensity you’re not going to always play hard in the games.”

That commitment to those principles has led the father-son duo to over 1,100 wins, by far the standard in Illinois. His Dad picked up 447 wins at five different schools.

Several of Lee’s most memorable wins were at Nashville including winning his first regional title beating Okawville at the Breese (Central) regional in 1992 and winning the Super-Sectional in 1997 over Harrisburg to advance to the state tourney for the first time.

At Collinsville, one of his most memorable wins was the 2,000th win in Kahok basketball history in January of 2012. That was a 56-53 decision over Oakville, Mo. at the Belleville (East) Mid-Winter Classic.

Also included was the 2019 Prairie Farms Holiday Classic championship game victory over Mundelein and finally, his 600th career win, a 46-42 decision over Jerseyville at the Jerseyville Mid-Winter Classic.

While there are so many good times in coaching inevitably coaches recall the losses even more vividly than their biggest wins.

For Lee, he mentioned state games against small school power Teutopolis and Spring Valley Hall as particularly memorable ones. However, his toughest loss was gut-wrenching.

We all remember the Kahok season of 2019-20 where the 31-3 Kahoks had won three regular-season tournaments, another SWC title, and the Belleville East Regional.

They had beaten a solid O’Fallon team in the sectional semifinals and were scheduled to face Normal (West) for the championship of the Class 4A Pekin Sectional.

Then COVID-19 changed everything.

“The biggest loss was probably when we didn’t get to play,” said Lee. “Not playing the sectional final was first. The game we didn’t play was the biggest and then the other ones we lost (on the floor). It’s always those postseason games that are the toughest.”

Assuming you stay in coaching long enough, those great triumphs and disappointing losses are part of the job. Career achievements are as well.

Regardless of when these two milestone events occur, Lee has the same attitude as many coaches who have seemingly been in the profession for a lifetime.

“When I was younger, I really didn’t think I would still be going at age 58,” he said. “But now that I’m here I really don’t know what else I would do.”