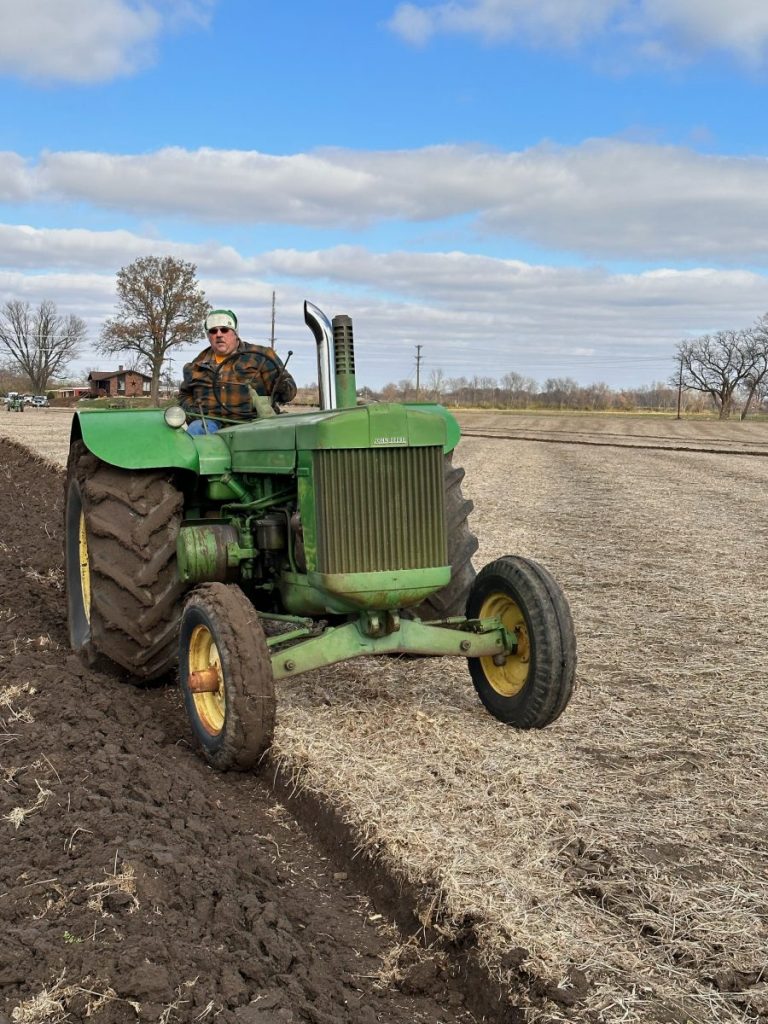 The Southern Illinois Green Iron Club (SIGIC) gathered in Troy this past Sunday to till land, educate and preserve farming culture.

After breakfast, eight members of the SIGIC mounted their antique tractors at around 10:30 a.m. and cultivated about 40 acres of land at 7715 Bouse Road. There were a variety of tractors out there putting in work, ranging from one to four bottom plows. They finished plowing right at dusk.

“It’s a fun time when you get together with your friends and bring out all of the old equipment,” said Berkel. “We get to share and display it with the average person, who maybe hasn’t seen them or knows the history of these old machines.

Andrea Payton, club member and wife of John Payton, talked about the fun of seeing kids get a kick out of riding on the tractors.

“The aspect of these guys and girls having little kids that get to go out and play with their tractors is the most exciting part for me,” Payton said. “These tractors were made for work, but now all they get to do are parades and shows and just sit around.”

Events like these allow the tractors to do what they are meant to do, as well as pass knowledge of the heritage down to the next generation. Knowing these 80-year-old tractors still are out there doing what they are suppose to do is cool thing, Payton said

After two cancellation and nearly a third due to poor weather conditions, these John Deere enthusiasts were super excited to for this Plow Day, SIGIC President Mark Berkel said.

This was the third and final annual Plow Day for the Troy-area that will be held successively. According to club member John Payton, the next Plow Day for Troy will possibly take place in the next two years. Next year, in October, SIGIC will hold Plow Day in the Mascoutah-Trenton area.

According to Berkel, a lot of the members grew up on John Deere equipment and it’s something that is kind cultivated into you.

“My grandfather started out with horses and his first tractor was a Fordson Tractor, then International,” Berkel said. “He had a lot of trouble with International, so he switched to John Deere and never switched back. My grandfather was a die John Deere man, when he died at 83, he was still using John Deere equipment. I still have tractors that belonged to my grandparents from the 30s.”

Stanley Detmer, founding member of SIGIC, told reminiscent stories from the early days of the club. He explained that Two-Cylinder Southern was the original name of the club, but John Deere opposed it because it was too similar to their name, so they went with “Green Iron.”

“It all started with me and my brother Reginald,” said Detmer. “We went to the Two-Cylinder Club in St. Louis, but we didn’t like it because they were mixing other brands with it. We came over here and decided to start Two-Cylinder Southern, but John Deere said that we couldn’t use their Two-Cylinder name.”