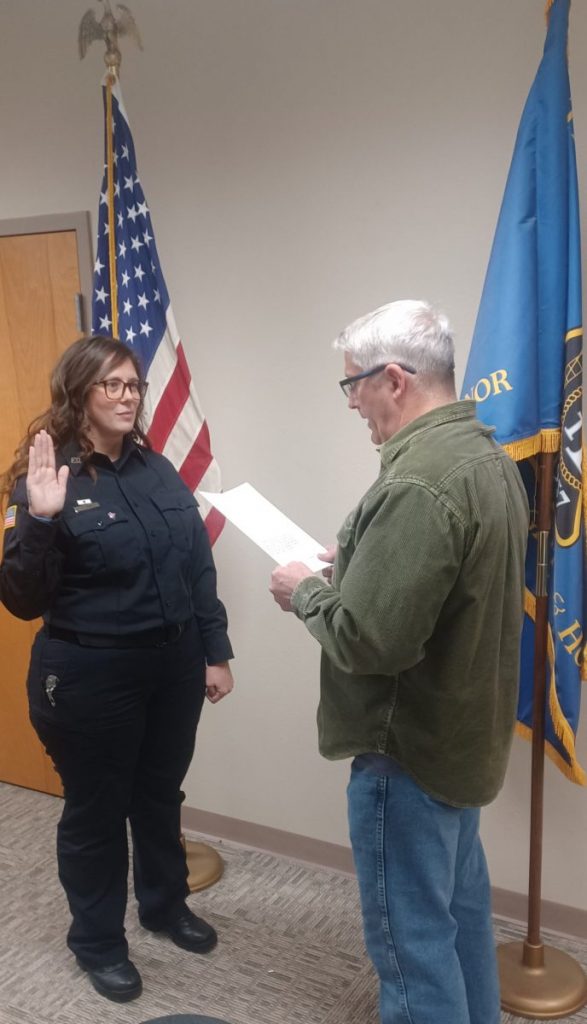 CORRECTION: An earlier version of this story incorrectly stated the TFPD tax levy will stay “as is.” The district is seeking to increase the levy by 11%, while individual tax rates based on assessed valuation will stay flat. Updated information is in a separate article: TFPD seeks tax levy increase.

An historic moment kicked off the Troy Fire Protection meeting on Wednesday, as officials swore in the first full-time female paramedic to ever serve with the district.

Paramedic Faith Tarr drew a round of applause from fellow firefighters and community members as she took the oath administered by Board Secretary Fred Patterson. Following the administration of the oath, her daughter Avery pinned on her badge.

Assistant Chief Ed Smith pointed to a stork pin on Tarr’s lapel and noted she was one of the medics assisting when the district delivered its first baby girl in August of 2020.

“We had only delivered male babies in Troy,” Tarr said. “I wanted to be the first female here and the first one to deliver a female baby. And that morning that call came out he (Smith) was like ‘I have to get you there’ and he did.”

Smith said Tarr’s performance in her more than four years with the district has been outstanding.

“We have outstanding people here and she is one of our top folks on the EMS side,” Smith said. “From a personal standpoint she is caring and she is thorough. They all do a great job, they really do.”

Board members during the meeting proposed an increase to the tax levy, which appears in a separate article in this publication titled “TFPD seeks tax levy increase.”

At the meeting it was also announced Interim Chief Kevin Manso will be retiring at the end of December. Maso, who has led the department since the firing of Chief Ed Collins in November 2021, was not at the Wednesday meeting.

However, board members said the search for a permanent leader for firefighters is drawing closer. The search has been narrowed to three candidates and additional discussion was planned during an executive session following the meeting.

The district in October said a hire is expected in January.

Firefighters in October answered 34 calls. Of those eight or 23% were for mutual aid to other agencies. Six of the calls, almost 18% were for weed or field fires. There were four calls to a structure and two structure fires. Crews also responded to four EMS assist calls, three reports of gas order and one vehicle fire.

On the EMS side, paramedics responded to a total of 109 calls. Transports accounted for 71 of the calls, while 31 patients refused transport. Five calls were canceled.

The firefighters appreciation dinner is set for Jan 20. Board members approved an allowance of $1,500 for the event.

The next meeting of the Troy Fire Protection District is set for 7 p.m. Dec. 21 at the firehouse, 116 West Clay Street in Troy.