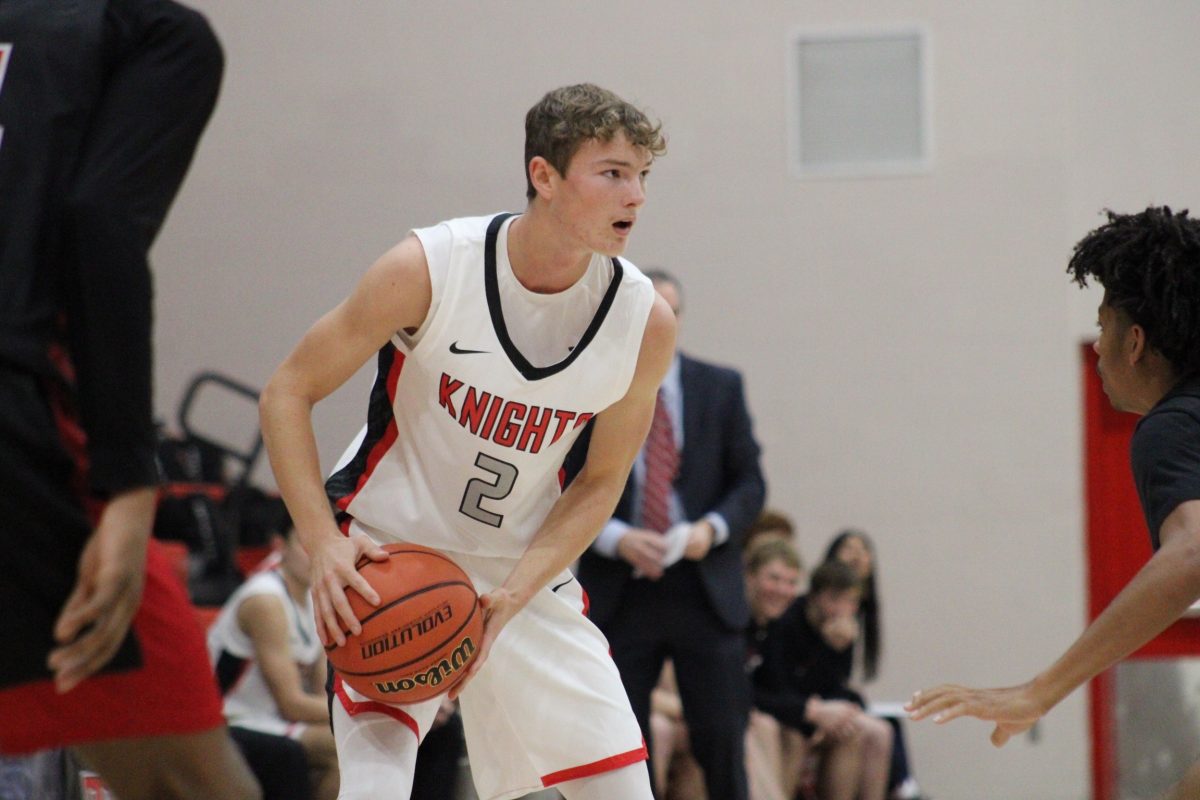 The first piece of that puzzle came into place on Nov. 22 with a visit to the Mt. Vernon Rams in the opening round of the Stovetop Stuffing Classic.

Mt. Vernon jumped out to an early 17-10 lead at the end of the first quarter, but by halftime their advantage was cut down to 29-25. A 12-12 tie through the third quarter left the Rams ahead 41-37 with eight minutes to play.

But momentum took a hard left turn in the final period. The Knights lit up the scoreboard with 19 points, while holding the Rams to 7. This late game rally delivered a 56-48 verdict in favor of Triad.

Drew Winslow led the team in scoring, totaling 15 on the night. The sophomore finished five of seven from both the field and the line.

“That was probably one of the most physical high school basketball games I’ve ever been a part of. We figured out how to win,” Coach Jeff Guidry spoke of his team’s season opener.

The following evening, Triad hosted Granite City for their home opener. A 2-0 record, including a 14 point victory over Mt. Vernon, belonged to the Warriors prior to tip off.

In the opening quarter, five different Knights would light up the scoreboard. Their balanced attack combined with strong defensive play pushed the team ahead 12-5 by the end of the first.

Three long balls from the Warriors helped slice down their deficit by half, as the Knights led only 18-16. The third quarter was Triad’s turn for a quality run, as they outscored the visitors 10-2 to take a commanding 28-18 lead.

Both offenses exploded in the final quarter thanks to a flurry of fouls, but the Knights once again bested their foes to leave with a 50-37 victory.

Coach Guidry was impressed by Granite City’s gameplan that held the score tight through halftime, “They did a really good job of trying to get us out of how we like to play. We like to speed things up and get going at the offensive end in particular.”

Noyes was key to the team’s victory, racking up 18 points and 10 rebounds.

“He had a big game for us. He’s come a long way in a short period, he put a lot of work in and it’s really paying off,” his coach remarked.

On Nov. 25, Triad hit the road once again to battle the Taylorville Tornadoes.

The Knights jumped out to an early 10-4 lead and further distanced themselves to a 35-13 advantage at the intermission. Their lead would remain intact as they went on to win 69-27.

Ayden Hitt became the third Knight to finish as the team’s leading scorer, racking up 18 points. Winslow also had an impressive statline with 12 points after going five of six from the field.

Triad’s fourth game in five days, a visit to the Springfield Senators, would also prove to be their toughest. Their Central State Eight conference opponent had knocked off Granite City 50-41 the previous night.

Homefield advantage proved effective in the early action and Springfield led 11-6 through one quarter of play. A 9-2 to start the second pushed the Knights back into the game and helped fuel a 25-24 margin at halftime.

The scoring stalemate continued through the third period, with both squads added a dozen points to their total.

Both teams continued to trade shots and it would take the final seconds to find a winner. Winslow would score his sixth points of the quarter to push his team ahead 48-46.

Springfield would respond with a drive down court and to the rim, but the shot fell away into the hands of freshman Tyler Thompson. The first year player would be fouled and hit a shot to deliver the final score of 49-46 in Triad’s favor.

Off to their best start in six years and returning all but one player from last season, Coach Guidry feels his team is in a good place, “We’re a year older and get everybody back. We told them there’s really no excuses here.”

Triad will face their biggest test so far on Nov. 29, when they host the Columbia Eagles. Columbia will also enter that match with a 4-0 mark and be ranked as one of the top teams in IHSA Class 2A.