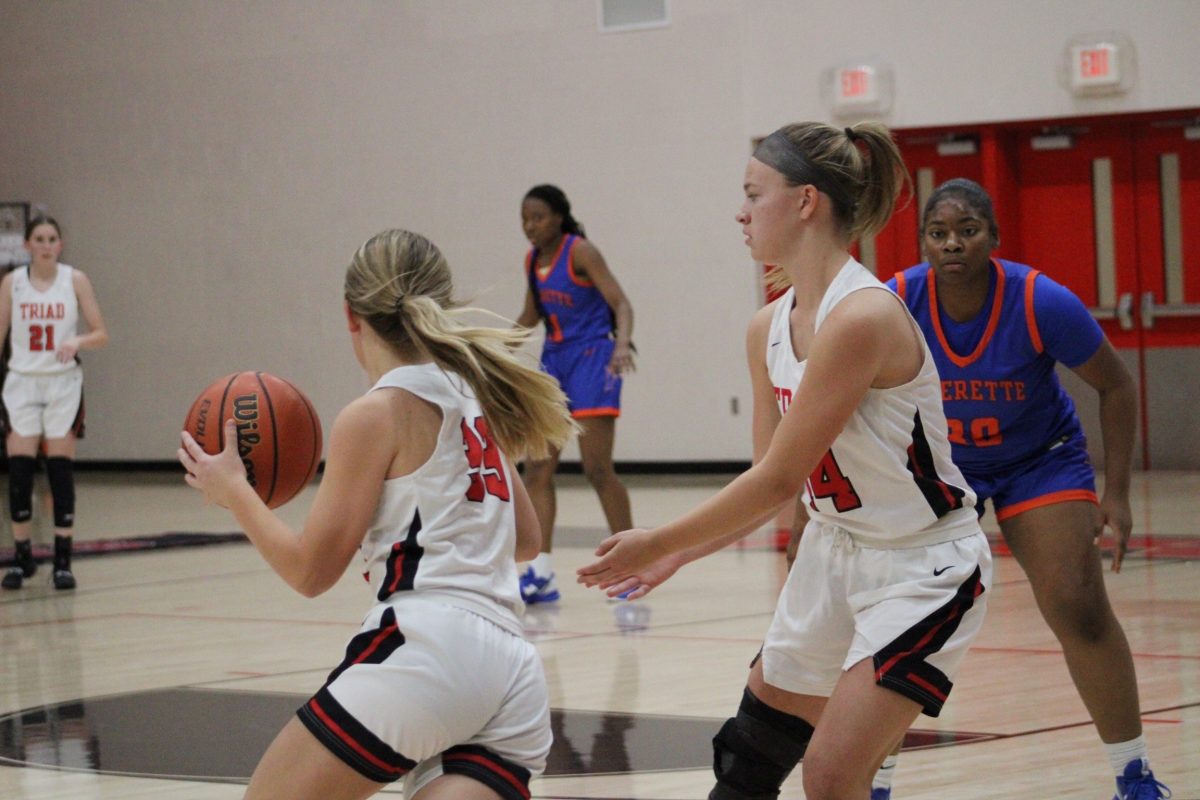 The East St. Louis Flyerettes paid a visit to Triad girls basketball on Nov. 22, marking the first home contest of the Lady Knight’s season. East St. Louis entered the contest with a 3-0 mark.

An 8-8 tie in the first quarter had the two squads deadlocked, but the visitors closed out the frame with a 4-0 run. Thanks to Savannah Hildebrand’s second three of the night, Triad would draw within 13-11 early in the second.

A subsequent 11-3 run would see the Flyerettes soar ahead to a 24-14 advantage. The Southwestern Conference representatives relayed this rally into a 29-16 gap at the intermission.

Triad’s offense found better footing in the third quarter, but were still outpaced 17-10. By the end of the night, they were outscored 57-39.

“That’s a really good game for our team. They’re a possible regional opponent and we’ll get better because of playing that game,” Coach Hunt discussed their matchup with East St. Louis.

Maddie Hunt and Savannah Hildebrand led the home team’s scoring efforts with eight points each. Hunt also led the squad with 6 rebounds on the night.

Even with their 0-4 start, their coach is still finding positives for the team with three upperclassmen, “We are really young, but we’ve told them we’re not going to use that as an excuse. With that being said, these girls are growing up right before our eyes. We’re a little bit better tonight than we were on Saturday and that’s the key with these young girls and a young team.”

Mississippi Valley Conference play begins on Nov. 28 for the Lady Knights when they host the Jersey Panthers. The 2-1 Panthers are headlined by junior Tessa Crawford, who has averaged 20 points per game this season.

“The conference is loaded, probably the best it’s been. Civic Memorial obviously finished fourth when they got to State last year and they returned a lot, so they’re probably the favorite you know until somebody knocks them off. Highland returns most of their team and they’re really good. They’ve had some good wins already. Waterloo is the best team they’ve ever had. Last year was the best team they ever had; they’re all just a year older. Mascoutah has the best team they’ve had in 25 years and they’ve got a girl that averaged 23 a game. Jerseyville has a really good player. Obviously we’re gonna fight tooth and nail to try to compete in the conference,” Triad’s coach broke down this season’s depth in the conference.