Jason Watts, a science, engineering, technology and mathematics teacher at Charles Dorris Intermediate School in Collinsville, and Sarah Deiters, a seventh and eighth grade reading teacher at Triad Middle School in Troy, are recipients of Emerson Excellence in Teaching Awards for 2022. 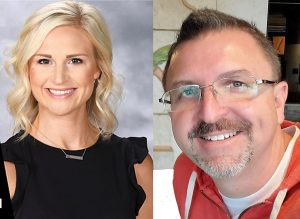 Those getting the award, according to information provided by the global technology and engineering company headquartered in St. Louis, were selected by their schools’ leaders.

Watts and Deiters are among more than 80 educators from across the St. Louis area who have been recognized with this honor.

Now entering its 34th year, the Emerson Excellence in Teaching award program began in 1989 with support from the corporation’s charitable trust fund that has been the source of $8.3 million in donations to educational programs, individual schools and scholarship recipients through the end of September of this year.

“Emerson is proud to recognize educators in the St. Louis area who show an unwavering commitment to the successful futures of their students,” commented David J. Rabe, Emerson vice-president of corporate social responsibility. “We are delighted to celebrate the vital role of our community’s inspiring educators in this annual awards program.”

Only educators who have been employed for three or more years at their current school are eligible for selection for this award with individual nominations allowed only once per every 500 full-time teachers. Emerson is not involved in the decision about those honored with this instead being granted to the specific schools or districts.

Each recipient receives an award plaque with his or her name engraved on it and a complimentary gift basket. Emerson has announced it is discontinuing the “Gold Star” grant designed to fund educational projects that reflect what the corporation calls “the pillars of its brand”: technology, innovation and leadership. Since 2006, Emerson had awarded $555,000 to area teachers and schools through this grant program.

In its place, Emerson is refocusing “its charitable giving strategy and resources to address education inequity” in the communities where it operates in the form of donations from the corporation. The awards program is open to all public and private schools which provide full-time instruction to students, kindergarten through college, in the St. Louis metropolitan area consisting of four counties in Illinois, five in St. Louis and the City of St. Louis.