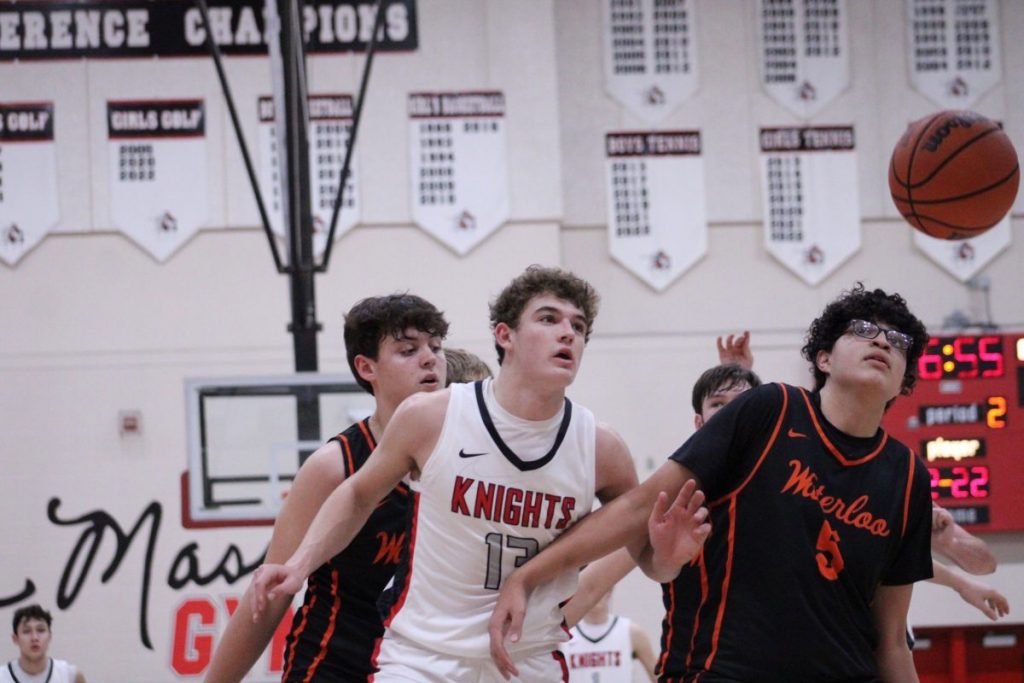 Last week certainly was not easy for Triad basketball.

The Knights three opponents included a reigning state champion squad, a top five ranked team in Class 2A and a conference foe that bested them twice last season.

Their first contest of the competitive slate came on Nov. 29, when the Columbia Eagles visited Troy. Both teams entered the evening with a 4-0 record and the Eagles have since been ranked fifth best in Class 2A in the AP poll.

Columbia shot effectively from the field early on, pushing them to an 11-7 lead at the end of the first. But the Eagles’s lead proved not to be long for this world.

Seventeen points, all from Drew Winslow and Jake Stewart, jolted the home side to a 24-19 situation at the break.

Most of Winslow’s damage came as he drove to the hoop in one-on-ones, “I enjoy it. I think I can get to the rim pretty well and that’s what coach encouraged me to do.”

Triad continued to build on their lead in the second, but a pair of consecutive corner threes from Aydin Hitt effectively sealed the game at 44-30. The hosts would ultimately prove victorious in 54-39 fashion.

The win moved the team to 5-0 on the season, but Coach Guidry still felt his unit had room for improvement, “Five wins, we’ll take it any way we can. I still don’t think we’re playing quite to where we need to play, but they’re picking each other up. If someone has an off night, somebody else has a big night. We’ve got to get better in the first quarter, it’s killing us offensively.”

Winslow led all scorers with 21 points and knew the importance of knocking off the Eagles, “It’s a really big statement. Columbia is a really good team and we’re not stopping here.”

Dec. 2 saw the team back at home to defend their undefeated record, facing off with a Waterloo squad they finished 0-2 against last year. The contest also served as the conference opener for both teams.

After one physical half of play, Triad led 23-16 and did not trail at any point. Hitt led the home team with 8 points at the intermission, but began to truly heat up in the second half.

All twelve of the Knight’s third quarter points came from Hitt, who converted from deep thrice. Waterloo could not keep up with the sharp shooting senior and fell further behind at 37-26.

The first four points of the fourth came from Hitt and his team would ultimately win 48-35.

Hitt’s 24 points would lead all scorers.

“Anytime you play Waterloo, they’re just such a physical team. In the second half, we did a really good job defensively of keeping them out of their offense,” Guidry spoke of the first Mississippi Valley opponent.

He also appreciated their 1-0 start in the conference race, “If you look at our conference this year, every game is going to be a grind. There’s not going to be an easy game this year and I think that’s an example of what’s to come.”

The week’s conclusion came on Dec. 3 with a trip to Black-Diamond Harley-Davidson Shootout in Marion. Triad matched up against defending state champions Nashville for their part of the action.

Nashville succeeded at slowing the pace of play early on, but still trailed on the scoreboard. The Hornets would be outscored in each of the first three quarters and found themselves in a 29-16 hole.

An offensive explosion of 26 fourth quarter points for Nashville turned the tide however, leaving Triad with their first loss of the year at 42-39.

McGrady Noyes led the 6-1 Knights with 13 points after a perfect day shooting. The senior also led his squad with 4 rebounds in the loss.