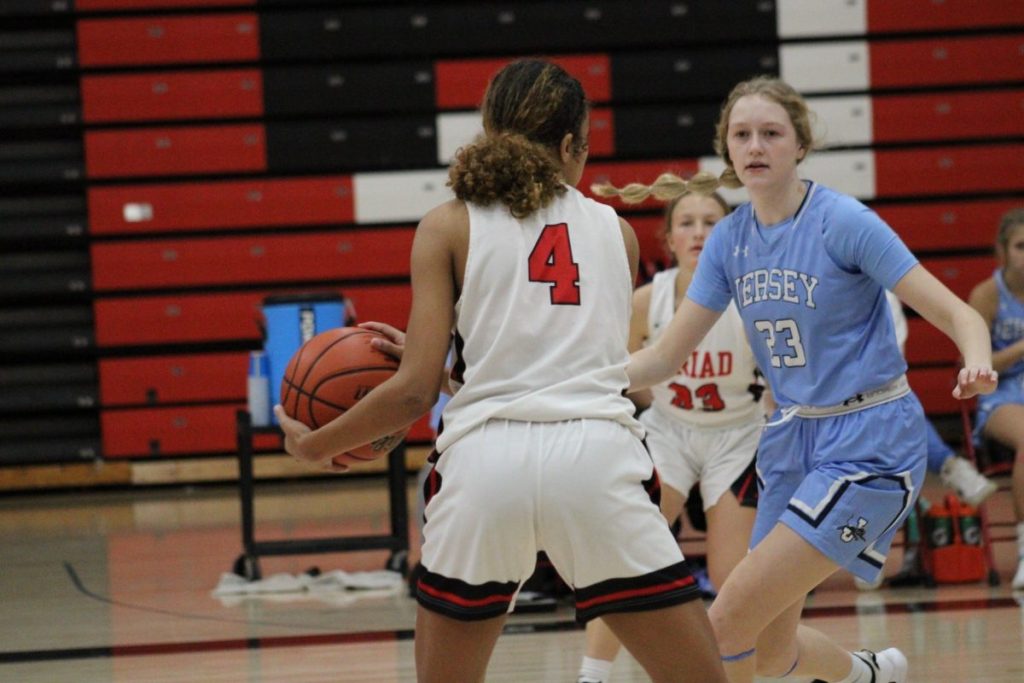 Sophomore Makenna Witham keeps the ball away from a Jersey defender.

There will be no easy wins for girls basketball teams in the Mississippi Valley Conference this year.

Triad, who opened their conference slate last week, was shown two early examples of that principle in matchups with Jersey and Waterloo.

The first of those matchups came at home against Jersey on Nov. 28. Jersey entered the game with a 2-1 record contrasted to Triad’s 0-4 start.

Defense had the upper hand early in the matchup, as both squads scored 6 points in the first eight minutes. Play began to open up more in the second quarter and the Lady Knights scored their way to a 17-16 lead at the break.

The third quarter continued to pick up the offensive pace, as Savannah Hildebrand, Delaney Hess, Maddie Hunt and Andie Green all converted from behind the arc. Their heightened shooting from deep kept them out front with a 35-33 lead headed to the fourth.

“We’ve got really good shooters, we really do. They’re just young and right now they lack a little game confidence, so tonight could go a long way as far as confidence,” Coach Hunt discussed his team’s effectiveness from the three point line.

Several lead changes occurred in the final period, but a clutch Sami Hartoin corner three gave Triad a 46-43 advantage they would never relinquish. The Lady Knights would finish the game with a 55-48 margin.

On the other end of the court, Jersey’s Tessa Crawford was contained to a season low 17 points in the loss.

The Lady Knights opened their next month’s schedule on Dec. 1 to host Waterloo. Waterloo entered with a 4-2 mark on the season.

While Triad may have entered the matchup as the underdogs, they certainly did not look like it early as they led 20-6 after one quarter of play. This total tied the most Waterloo had allowed in one quarter and was tied for the second least the Bulldogs had scored in a frame.

“We showed up and we gave them hell. We came out and got in transition a little bit for some easy layups and that’s what we need to do,” Triad’s coach said of his team’s dominant start.

Nine points from Witham was key to the early game lead, while Hess dropped seven in the first period as well.

Waterloo began the long road back into the game before half, narrowing their deficit to 22-17. A buzzer-beating three for the visitors wrapped up an 11-2 run in the second frame.

Momentum seemed to roll back to the home side in the second half, as Hartoin contributed five points to a 7-0 Triad run.

A 15-0 Waterloo run that stretched into the fourth quarter quickly erased this work and gave the Bulldogs a 33-29 advantage. Hartoin scored her eighth point of the half on an ensuing three pointer, but a 4-0 run from Waterloo closed out a 37-32 victory for the visitors.

Witham, Hartoin and Hess all totaled ten points in the loss for the Lady Knights. Maddie Hunt added on the team’s only other points for a total of two.

While youthful Triad dropped to 1-4 overall with the loss, their coach still appreciates the way they’ve played, “These girls are believing and they’re buying in. The growth they’ve had just from game to game is remarkable, so I’m really proud of the effort and the intensity we play with.