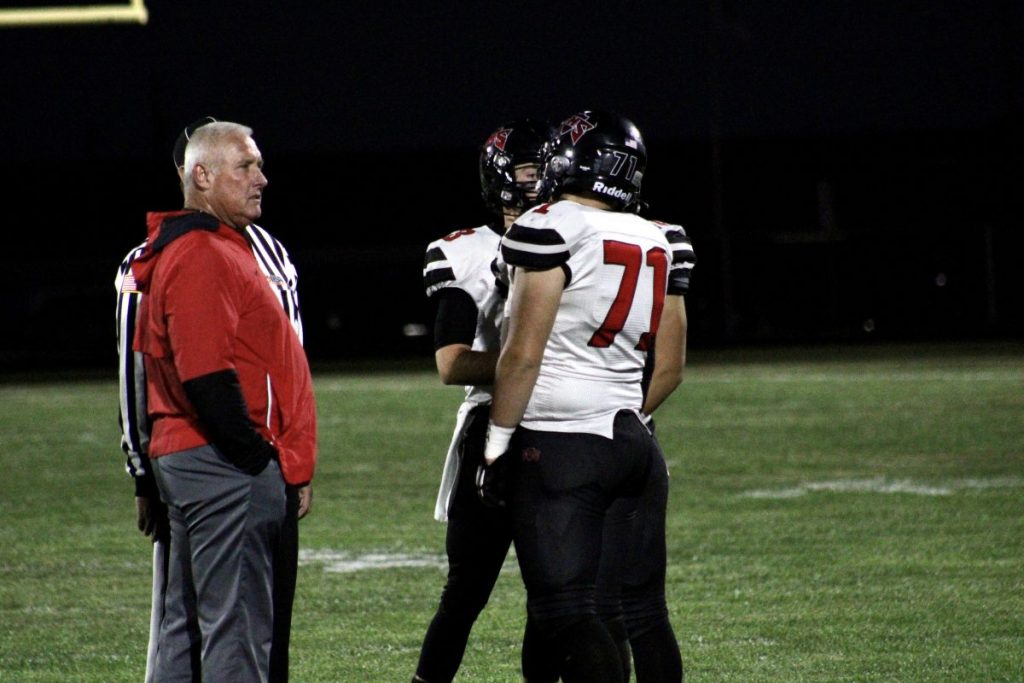 Paul Bassler, pictured left coaching a player, is stepping down after 25 years at Triad.

For the past quarter century, Paul Bassler has been the man in charge of Triad football.

Plenty has happened over the course of those 25 years, including Triad opening a new high school in Troy and making the switch to a turf field instead of grass.

Bassler, who recently submitted his resignation, achieved plenty over his years at the helm. He finished his career with a 152-98 record, 17 playoff appearances and 11 Mississippi Valley Conference championships.

On the decision to step down, the Belleville East graduate said, “I wasn’t having as much fun as I had in the past and I just felt like we just weren’t all on the same page coaching staff wise. When we had it rolling and we were all on the same page, it was just so much fun.”

Over his years, he relied heavily on a triple-option offensive attack.

“I went with the philosophy that we did, the double slot triple option, because I knew it and I played in it. I was comfortable with it because the whole premise of the double slot triple option is you can be undersized and under athletic and be successful. I wanted to have a system that still gave us a chance even if we were out manned,” the former Triad coach said of his trusty system.

While he oversaw hundreds of games and over a thousand practices, some of his fondest memories from the helm are keeping in touch with players after their playing days were over.

Bassler has compiled phone numbers over the years to help keep that contact, “About 2008 I got my first phone, I remember the kids were showing me how to program it and put my name in it. With the people that I have in my phone over that time period, I look forward to wishing them well and sending them a text message at Thanksgiving and at Christmas. Just staying in touch and seeing the players that have played for me grow into the men that they’ve become has been really special.”

Spending 25 years at Triad also topped Bassler’s list of accomplishments, “That means the world to me. My goal was to do a good job where I’m not going to get released and I have an opportunity to stay at the same school. I didn’t want to be a nomad and move around from school to school to school like some of these guys do.”

Not only did Bassler get the better of every MVC school, he nearly brought the Knights to an all-time  winning record, “We have a winning record against every single conference school and that’s pretty incredible. One of my major goals was to get the program back to .500. [When I took over], we were 112-171 and I came up just a little bit short of getting us back to .500.”

Triad averaged over six wins per season under his watch to close the gap. The Knight’s all-time record currently stands at 264-269.

Highland was Basser’s toughest foe in conference play, but he still ended his coaching run with a 14-12 advantage over the rival Bulldogs. Additionally, he finished 14-10 against Jersey, 18-6 against Civic Memorial, 20-6 against Mascoutah, 20-4 against Waterloo. Two more wins came over Granite City and Collinsville when the Mississippi Valley temporarily expanded in the spring of 2021, leaving Bassler with a dominant 88-38 mark against conference opponents.

While Bassler oversaw plenty of achievements with the Knights, playoff success is an area he felt lacking.

After finishing his Triad career with an 11-17 mark in the postseason, Bassler considers not making deeper runs a disappointment.

Of his 17 playoff appearances, a three year run of tough losses stands out as unfortunate.

“2005 was another quarterfinal team. We had 30-40 mile per hour winds and we had two field goals that we kicked through the uprights and they blew back out. The wind really affected our game and we ended up losing that to Cahokia 12-7.”

“Austin Wuebbels’s senior year was 2006 and that was the ‘immaculate incompletion’ at Marion. They heaved up a Hail Mary and it went through his arms at the one yard line and hit the ground and they gave him the catch at the one yard line. They punched it in and beat us 21-17 with about 20 seconds to go in a game,” he said of the unlucky stretch of eliminations.

But Bassler is positive that the disappointments do not outweigh all of the highlights over his years, “I have so many more good memories than I do bad. So many more.”