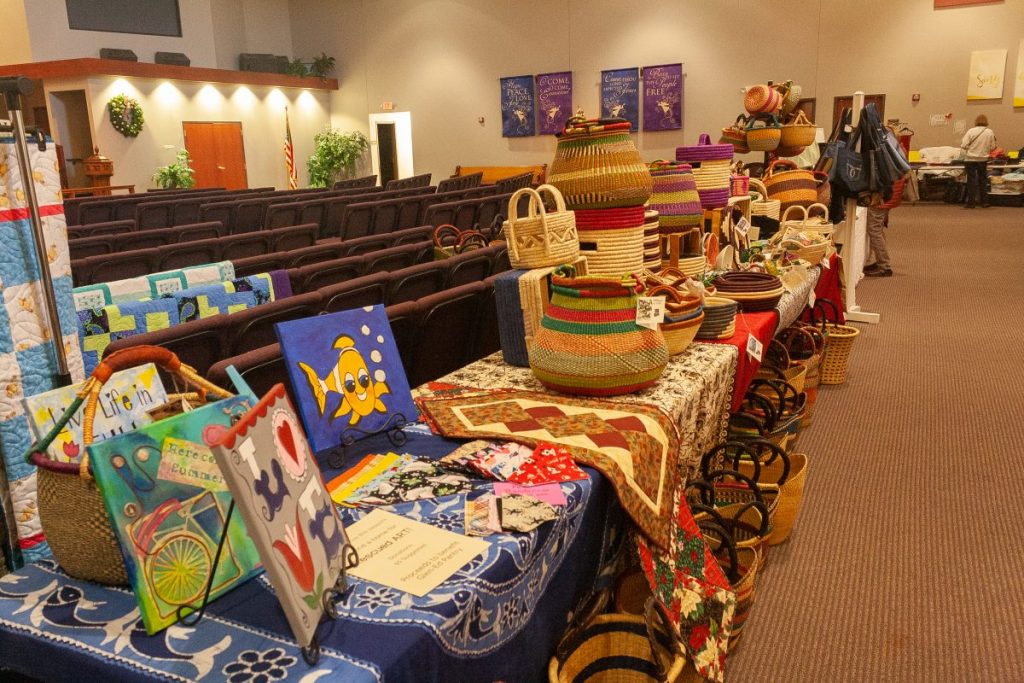 Ten by Three, a nonprofit organization that helps to fight poverty sells many of the various pieces of art done by the weavers they held support, on top of rescued art that was saved from the trash and resold.

The event is hosted by the United Women in Faith and began as an event where homemade cookies were sold in large quantities in order to fund different charities, from local to national. Locally, the group supports places such as the Glen-Ed Pantry and the Troy Pantry.

Jan Denby, a member of the church and one of the key organizers of the event, said the goal of the United Women in Faith is to try and serve others who don’t have as much or who need guidance.

“The United Methodist Women in Faith is serving the least, the lost and the lonely — that’s kind of our mantra,” Denby said.

The event eventually became a way for the church to sell donated items to further give to their charities, as well as promote local business in a vendor fair where different types of crafts are sold.

One such vendor is the nonprofit organization, Ten by Three, which helps to bring high quality handcrafted goods made by weavers around the world to help them get out of poverty.

Marilyn Hungerford, the vendor selling the items at the event, said the baskets sold at the event came from weavers from four different countries, along with some other items from two other countries.

Each item sold at the vendor stand also had a Ten by Three signature, that being information about each individual artist and where you can find more of their work with the unique code each tag has.

Church pastor Grant Armstrong said he’s only been at the church since 2018 but has tried his best to get involved with the already established annual event. He said this is also one of the events the church looks forward to the most, because it involves the community along with the church itself.

“For this event, it is a draw for the community. This is a weekend and all throughout the season people are looking for these types of vendor fairs and market places, so the invitation is far and wide for the Holiday Market,” Armstrong said.

He said he is also one of the organizers for the other event at the church that occurred Sunday night for the first year ever. But he said his main role is that of encouragement for the events and to make sure all necessary resources are available.

This event involved giving children the opportunity to have a craft night along with more events as the night went on. Sammy Rawson, the church’s Director of Children, Youth and Families Ministry, is also involved in both events, but is tasked with keeping the children where they need to be and making sure things are going right.

Rawson said he’s only recently come to the area from his home in the United Kingdom where he was also involved in faith.

“I came to faith about six or seven years ago and it’s just been the driving factor of my life since then,” Rawson said.

Though new to the church, Rawson said he’s heavily invested in being able to let as many people as possible feel welcome and like they can get involved with events like this.

“My belief is that the church should reach everyone, not just the people who believe. Anyone should benefit from a church being here,” Rawson said. “It’s about bringing people in (and) just getting them (to see) what we do.”