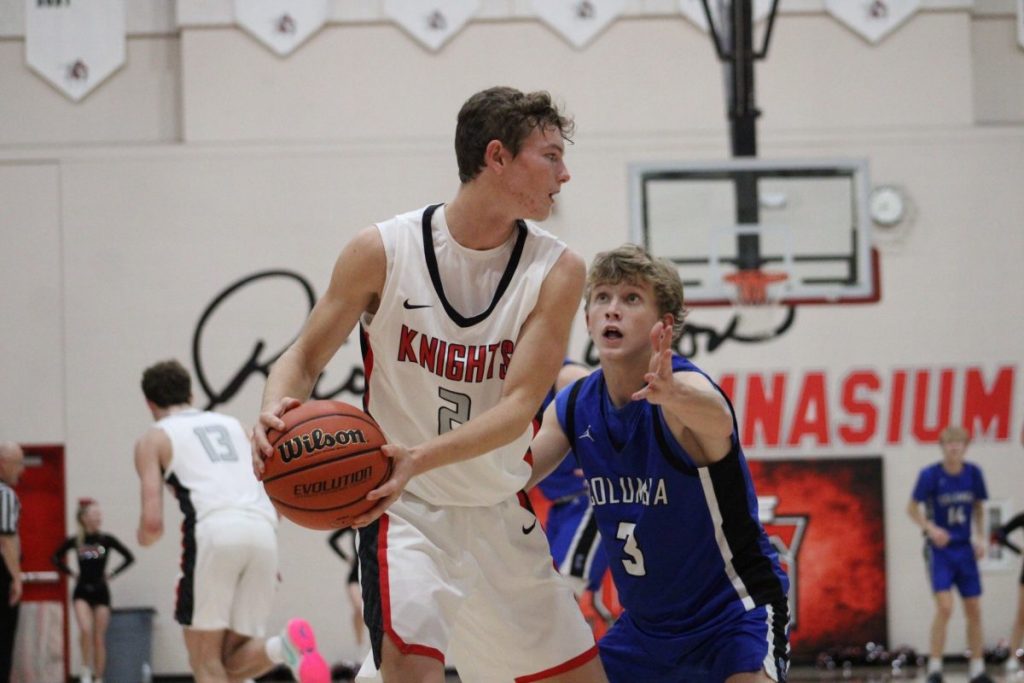 Senior Jake Stewart comes down with a rebound during earlier season action.

As the Mississippi Valley race continues to heat up, Triad improved to 2-0 in league play last week. Their undefeated start has the Knights tied with Mascoutah and Jersey for the conference lead.

Their second league win came on Dec. 9, when Triad visited the Civic Memorial Eagles. The hosts boasted a 3-3 overall record prior to tip off and visitors put their 6-2 mark on the line.

Triad took control of the bout early, leaping to a 7-0 advantage. This hot start was nearly erased by the end of the first however, as the Eagles closed the gap to 15-13.

The squads found themselves deadlocked in a 19-19 tie in the second period, but the Knights rallied for a 5-0 run. Thanks to this hot streak, they took a 24-19 advantage into the half.

In the second half, Triad slowly grew their lead before eventually scoring a 46-37 victory.

Sophomore Drew Winslow finished as the game’s highest scorer with 17 points for the Knights and a team-high five rebounds. Tyler Thompson, a freshman, added 13 more to the victor’s total.

Earlier in the week, Triad took another road trip to Breese Central. The Cougars entered that Dec. 6 matchup with a 5-0 record and only having played one opponent within ten points.

Breese’s Chase Lewis caught fire behind the three point line early and the Cougars relayed that into an 18-7 lead at the end of the first.

The home team’s shooting cooled off in the second, but they continued to outscore the Knights in 12-7 fashion.

Triad began chipping away at their deficit in the third, cutting Breese’s lead down to 39-28 with eight minutes to play. Fourteen points helped the Knights close the gap, but they ultimately fell in a 50-42 final.

Both McGrady Noyes and Drew Winslow scored 14 points for Triad. Senior Aydin Hitt reached double digits with 10 points of his own.

Triad returns to action on Dec. 16 to host rival Highland. The Bulldogs are off to a 4-3 start overall, but stand 0-2 in MVC play.