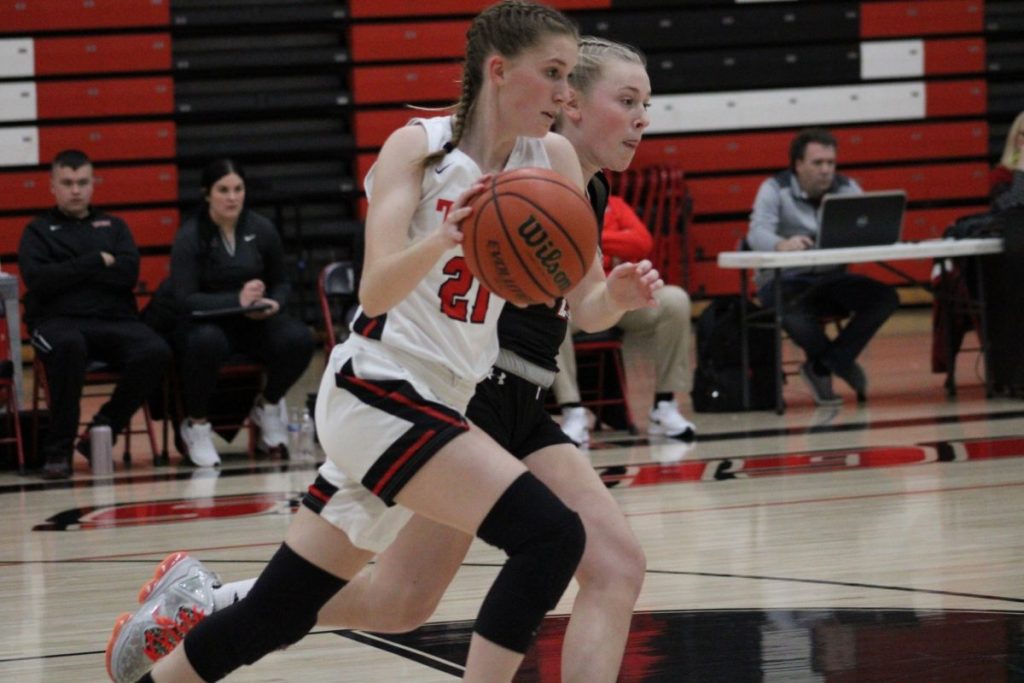 Savannah Hildebrand drives up court during a home court.

Their first battle of the week came on Dec. 5, when they visited the Freeburg Midgets. Freeburg entered the evening with a 3-4 record and Triad sat at 1-5.

The first few minutes of action saw a balanced start, with the Midgets ahead 6-4 halfway through the first.

But the home team quickly caught momentum, going on an 11-0 run to lead 17-4 in the second quarter. A subsequent 13-5 run for Freeburg expanded their advantage to 30-9 at the intermission.

Triad’s offensive and defensive results improved in the second half, but they still found their deficit expanding after being outscored 22-14 in the later half. The night’s final score was 52-23 in favor of the hosts.

Sam Hartoin led the Lady Knights with 6 points, all coming from inside the arc.

Three days later, the team made another road trip. Their destination, Bethalto, featured a 6-2 Civic Memorial team on a 5 game win streak.

The first three and a half minutes saw five total points, with Delaney Hess scoring to pull Triad within 3-2. Civic Memorial rolled for the remainder of the first, expanding their lead to 10-2.

In the second frame, both offenses started slow again. Both teams tallied two points in the first five minutes, nudging the score out to 12-4.

Once again, the home side closed out in dominant fashion. The high scoring Eagles finished on a 7-1 run to take a 19-5 lead into the break.

The lone basket of the first four minutes of the second half came from Triad’s Makenna Witham. Another Witham basket and a corner three from Savannah Hildebrand fueled the Lady Knights to outscore their foe 7-6 in the third frame.

Civic Memorial once again bested Triad in the fourth, doing so in 16-14 fashion. A 41-26 loss dropped the Lady Knights to 1-7 on the year and 1-3 in conference play.