There was a lot to unpack on Dec. 6 at Fletcher Gym.

First and foremost Collinsville picked up their first SWC win of the season with a 60-35 win over Belleville West. 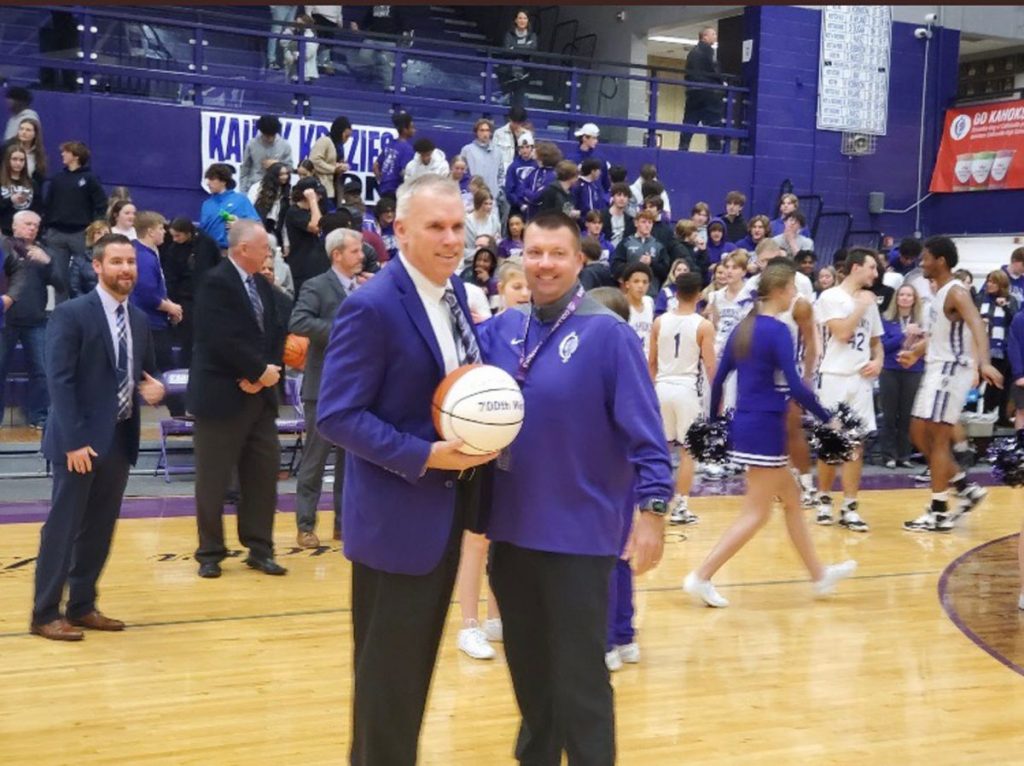 Second, it was Collinsville coach Darin Lee’s 1,000th career game as a head coach in 34 seasons between the Metro East, Nashville, and Vienna.

“When I was younger, I’d see some of the veteran coaches get to those and I would go, ‘Wow! I’ll never be at that point or I’ll never coach that long,’ when you’re in your 20s, and then here I am,” said Lee. “Really to coach this long you’ve got to have good kids and good staff. I’ve been fortunate with that. Finally good parents. It’s all three kids, parents, and staff.”

The first of those three was on display all night against the Maroons as they got solid performances from so many players, none the least of which was KJ Thorps-Watt.

“He’s our sixth guy that we play in different positions,” said Lee. “He gives us athleticism, offensive rebounding, and some quickness. He can give us a spark he’s really done that.”

With 39.2 seconds to play in the opening quarter, CHS big Adam Rimar encountered difficulty with his contact lens and had to be removed from the game. Enter Thorps-Watt who made an immediate impact by getting into the passing lane and taking it to the other end for a layup to give CHS a 13-10 lead with 35 seconds to go.

West would hit a three to tie the game headed into the second stanza, the deciding stanza.

The other Kahok big, Zach Chambers, was having a stellar game and had just collected his eighth point on a nice move to his right in the paint to give CHS a 15-13 advantage. Then adversity struck as Chambers picked up his second foul trying to block a shot and after West hit the free throws he was whistled for his third foul seconds later on the offensive end.

Fortunately, Rimar was ready to return but the twin towers effect in the paint had disappeared for the remainder of the half.

No matter, Thorps-Watt made several defensive and hustle plays while Jamorie Wysinger scored all ten of his points during the quarter to put CHS up 29-15 at the half.

Thorps-Watt made his presence known immediately when he swatted away a West layup attempt from behind to put a charge in the crowd.

Wysinger scored the game’s next eight points including burying a pair of threes to make it a 23-15 advantage for the purple and white.

A timeout by the Maroons could not stem the tide as Rimar hit a bucket to push the lead to ten. After another defensive stop, Thorps-Watt’s effort showed up again as he put back an offensive rebound from the weak side. He was the only person who saw the opening and worked to get the opportunity.

Finally, the duo forced two more turnovers with Wysinger’s courtesy of a steal and a layup to give CHS a 14-point advantage and causing West to burn another time-out.

For the quarter the Maroons went 0-for-7 shooting the ball and committed four turnovers. Collinsville outscored them 16-2 in the period including finishing the frame on a 14-0 run.

“I think we got a little more comfortable guarding them, maybe they got a little tired,” said Lee. “Jamorie is the main one, he was keeping number four (Brandon Scott) in front of him. I think he’s improved his defense. People want to see his shooting, we all know he can shoot, we know that.

“Adam was able to keep three (Quincy Cotton) in front of him and that was the matchup I was worried about. Nick (Horras) has been a great defender all year. He guarded (Daylen) Byrd, he’s really taken on all the good players. He’s our best defender.”

An uncharacteristic beginning to the 2nd half occurred as West went on a big 10-4 run early to cut the CHS lead to 33-25 with 5:36 to go in the third, but the Kahoks righted the ship as Jake Wilkinson hit a three with 5:16 to play in the stanza. It was his first bucket of the night on his way to a game-high 13 points.

Collinsville closed the quarter on an 11-2 run including a buzzer-beating three by Horras to take a 47-29 lead into the fourth.

Wilkinson hit the first eight points of the quarter for CHS and the Kahoks cruised from there.

Four Kahoks finished in double figures with Wilkinson having 13 points. Chambers had 12 while Wysinger and Rimar had ten points each.

Perhaps the biggest stat was that the Kahoks committed only two turnovers during the contest while forcing the Maroons into 16.

During the postgame, it was brought up that Collinsville won the game by 25 points but did not make a free throw. CHS was 0-2 during the contest with both of those coming late in the final quarter.

The last time Collinsville didn’t hit a free throw? February 17, 2015, at Edwardsville. CHS won the contest 40-37 even though they went 0-2 from the line. Ronnie Midgett had 17 points while Anfirnee Wilkinson had 15. Edmondre Rickman, who most recently played professionally in Canada, missed the two free throws.

Hartwig went all the way back to 2010 and found there have been seven games since 2010 where CHS has hit only one free throw in a game.