IMOGENE RUTH (JEFFRESS) COOK, the youngest of 4 children, was born on March 12, 1933, to Lee David and Grace Ethel (Smith) Jeffress. Imogene attended Alta Sita H.S. in East St. Louis, IL where she participated in many choral groups. After graduating in 1951, she attended S.I.U.E. and received a B.S. degree in education in 1973. She met the brother of her friend, Glenn Lloyd Cook, at a wedding. Glenn and Imogene were later married on September 18, 1952, at the military base in N 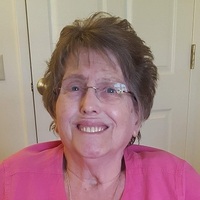 orfolk, VA, where Glenn was serving 4 years in the U. S. Navy during the Korean War. They remained married for 55 years until his death on July 10, 2008.

Imogene has always had a bright beautiful smile and is a gentle soul. No one ever heard her speak an unkind word. She had a faithful prayer life and studied the Bible daily. As an avid reader, she read most books in a day or less. She was a church musician by age 16 and skillfully played the piano, organ, and accordion for the next 60 years. Imogene always had a song in her heart and was heard joyfully singing church hymns throughout each day. She showed creative genius throughout her life through writing poetry, drawing, and painting. Her creativity was expressed frequently while teaching Sunday school and as a public educator. Her last painting was painted at age 87.

Imogene has resided in E. St. Louis, IL, Norfolk, VA, Belleville, IL, Troy, IL, Conroe, TX, and back to Troy where she received care from the Troy assisted living facility (The Fountains/ Morningside/Cedarhurst). A big thank you to the wonderful staff, who for 10 years provided quality and compassionate care until her passing. Thank you to Vitas hospice care team who also gave exceptional care. On December 10, 2022, at the age of 89 years, 8 months, and 29 days (32,780 days), Imogene, graduated once more; to her glorious new home with her Lord and Savior, Jesus Christ. She will be laid to rest next to her husband at Friedens Cemetery in Troy, IL. Memorials will be used for a blessing back to the healthcare workers at Cedarhurst of Troy.  Online expressions of sympathy may be made at www.Richesonfh.com. Visitation will be held from 11 am to 1 pm on Friday, December 16, 2022, at Richeson Funeral Home, Troy, IL. Funeral services will be held at 1 pm on Friday, December 16, 2022, at Richeson Funeral Home, Troy, IL with Rev. Myles Holmes officiating.