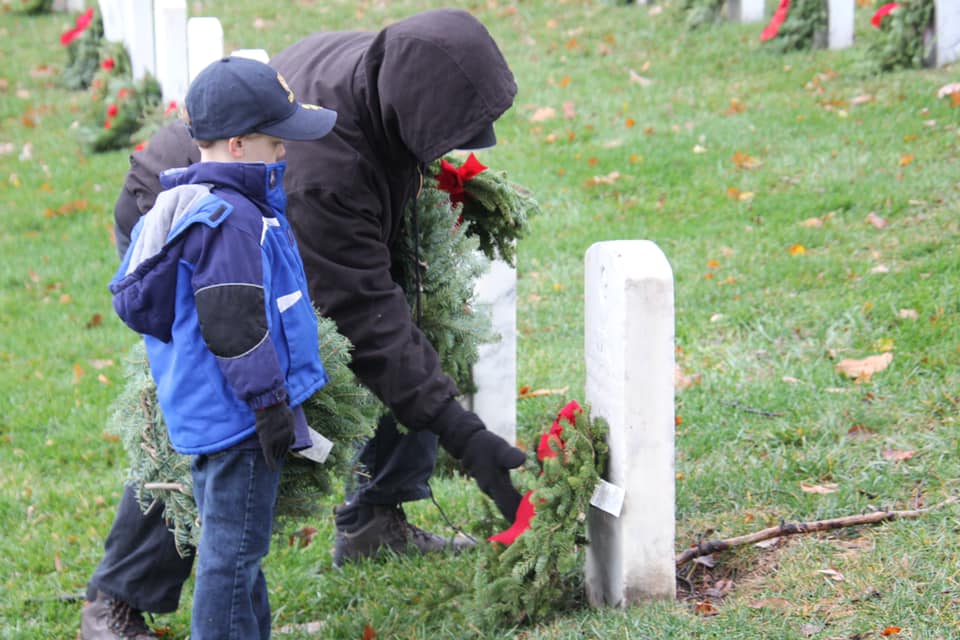 Nix/Judy Pioneer Cemetery in Glen Carbon will be one of many locations throughout the nation which will be part of the Wreaths Across America program to pay tribute to deceased United States military service veterans this Saturday, December 17.

Beginning with a ceremony at 11 a.m. members of Caseyville Veterans of Foreign Wars Post 1117 and other local groups will be among those coming out to honor the deceased who have served their country by placing holiday wreaths on the various graves including those at this one in Glen Carbon near the Interstate 270-Illinois Route 157 interchange.

Dale Anderson, past commander of VFW Post 1117, served as master of ceremonies for the wreath ceremony held at this location in 2021. About 20 people present joined with Anderson in saying the Pledge of Allegiance then he shared an electronic device recording of the National Anthem.

Following his introductory statement, Anderson asked for a moment of silence in memory of the fallen veterans, prisoners of war and missing in action who have served the United States.

As explained by Anderson, more than 2700 locations such as the Nix/Judy cemetery, are the sites where Americans will gather to pay tribute to deceased veterans.

Mentioning that “the freedoms we enjoy today have not come without a price,” Anderson continued by saying, “Lying here before us and in cemeteries throughout this nation are men and women who gave their lives so that we can live in freedom and without fear.”

After commenting about the nation’s standing as a shining beacon of liberty and freedom to the world and thanking the veterans during last year’s ceremony, Anderson went on to add how they have fought to protect the innocent and oppressed with the United States being the first to stand up for the freedom of others around the world.

The people lying in the graves at the Nix/Judy Pioneer Cemetery, including many who died over 100 years ago and who are being honored by having wreaths placed at their headstones, Anderson said, have been “part of the best-trained, best-equipped force in the world.”

Prior to fanning out on the grounds to place wreaths at each veteran grave, some individual members of the group in attendance come forward one-by-one to hang wreaths on specially set up hooks at the center of the property to recognize each branch of the U.S. military service including the Army, Marine Corps, Navy, Air Force, Space Force, Coast Guard and Merchant Marines along with one for those considered Prisoners of War or Missing in Action.

When the live balsam fir wreaths are set on the graves, the person doing so says that veteran’s name and takes a moment to thank him or her, offering a salute in some cases. After all the participants finish placing their wreaths with the help of maps and other information to guide them, everyone gathers once more at the point where the ceremony began and stands solemnly while “Taps” is played to close the program.