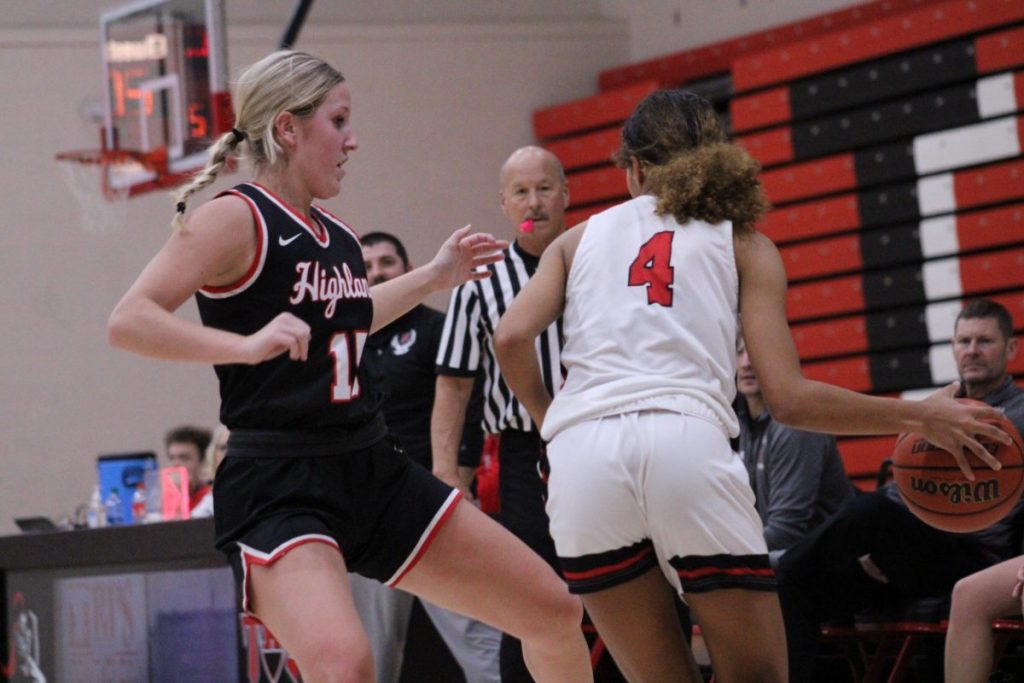 Their first loss of the week came from a visit to the Collinsville Kahoks. Entering the Dec. 12 bout, the Kahoks stood at 6-3 overall.

Collinsville took control of the match early with an 8-0 run out of the gate. A Triad rally in the final 3:32 of the first quarter nearly erased this however, putting them behind 14-13.

Neither team had a large advantage in the second period and the Kahoks took a 27-23 lead into halftime.

Collinsville opened the second half with another 8-0 run, extending their advantage to 35-23. Their lead would never go lower than seven points for the rest of the game enroute to a 50-43 victory.

Triad returned to their home court for a Dec. 15 showdown with Highland. Tied for the Mississippi Valley Conference lead heading into the night, the Bulldogs boasted an 11-2 mark.

“They’ve got a lot of weapons. They’ve got two quick little guards, two or three really good shooters and then they’ve got a post player too. That’s tough to deal with,” Triad’s Coach Hunt said of the rival Bulldogs.

The skills of the visitors showed from the start, taking them to a 15-5 lead in the opening quarter.

Their lead would grow to be as large as 17 points in the next period of play. Late free throws, including two untimed shots from Alexa Holley, helped the Lady Knights cut their deficit down to 26-13 at the half.

Triad showed signs of life out of the intermission, outsourcing Highland 10-4 in the first minutes of the latter half. Five points from Sami Hartoin and four points from Andie Green supplied much of the power to their rally.

Their hopes of a comeback quickly faded however and their disadvantage was extended to 39-24 at the end of the third. Highland ultimately won 46-29.

Hunt relates his youthful team’s start to where Highland stood a year ago before and hopes they may have a similar turnaround in the future, “Last year, they went through a lot of the struggles we are right now. They won six games last year and now they’re seeing the fruits of their labor. Now they’re 11-2.”

A lack of consistency is one of the main areas holding the Lady Knights back currently.

“We’ve got a lot of freshmen and sophomores. Unfortunately with that at the varsity level, there become inconsistencies. If you’ve got a sophomore sprinkled in with a bunch of juniors and seniors, you don’t probably notice it as much. We’re just going to keep growing and improving,” Hunt remarked about his team’s lack of consistency so far this season.