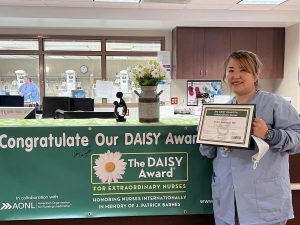 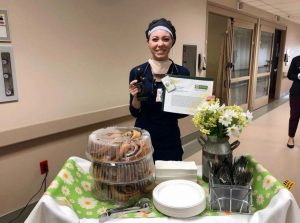 Have you ever been in a medical facility and needed help, but every nurse that you encountered seemed too busy or indifferent? Whether it be for you or a loved one, the event can be stressful.

The Daisy Award is an award that praises and honors the work nurses do for patients and their families everyday, wherever they practice, in whatever role they serve from Nursing School to Lifetime Achievement in Nursing, according to the The Daisy Foundation website.daisyfoundation.org.

Yuka Saathoff and Ashley Brannan, both Registered Nurses for Anderson Healthcare in Maryville were recently commended by the foundation for their exceptional deeds as nurses – earning the Daisy Award for Extraordinary Nurses.

Nurses can be nominated by anyone in the organization, patients, family members, other nurses, physicians, other clinicians and staff or anyone who experiences or observes extraordinary compassionate care being provided by a nurse.

Saathoff, a nurse in the obstetrics and gynecology unit received the first award of the year in August. Saathoff, who graduated in 1989, from the Japanese Nursing School, then she went to a training school for a year to advance her skills to become a stronger hire. In 2003, she began working her first job in the U.S. at Oklahoma University Medical Hospital as a registered nurse.

Saathoof said she relocated towards this area and started working for Barnes-Jewish Hospital in the OB, Modern Baby unit. She started at Anderson in 2007.

She describes herself as funny and loves sitting and talking with the patients. “To be part of someone else’s life during their time of need and make the patient feel at ease and  their stay more memorable,” Saathoof said.

Saathoff was nominated for the Daisy Award by Amanda Church, a nursing student who was admitted into the hospital in early labor at 37 weeks.

“She thoroughly explained my epidural and her plan to see me throughout labor and delivery,” Church said. “She was professional at all times, but put us at ease with her sense of humor.”

Church’s son was born at 1:15 a.m, but had some complications. After some tests were performed he was transferred to NICU at Cardinal Glennon Children’s Hospital in St. Louis.

Church said that as a nursing student it was kind of scary knowing more of what was happening clinically. “Yuka answered all of my questions and even stayed after her shift to see us through,” she said.

Saathoff said I guess watching my mom always take care of my grandma, when I was a young girl inspired me to want to do the same.

“Initially, I wanted to be a special education/special needs teacher, but in Japan, in order to do that I would have to get some nursing background. So I went to nursing school. It all worked out,” she said.

Brannan, a special care nurse, is the second awardee and she was announced in December 2022. She was nominated by a family whose father was a patient Brannan cared for in the ICU.

Brannan’s nomination letter read: “What a bright light Ashley is! Even though she had many other clients Ashley made my dad feel comfortable. She was quickly accessible and always fresh and friendly  with answers to inquiries.

Brannan said she first felt a calling to the profession even before she entered high school.

“I was about in the fifth or sixth grade when I got it in my head to become a nurse,” Brannan said. “I really wanted to be a nurse and kind of followed through with it and stuck it out. And I’m glad I did.”

Brannan said she appreciated the flexibility of nursing and was really intrigued by the science aspect of it.

“After shadowing some other nurses and really getting to talk to some people I just really like the impact they made at the bedside of patients,” Brannan said. “ And how knowledgeable and smart they were in assessing patients quickly.”

Another reason Brannan wanted to become a nurse was so she could have an impact by helping others.

“I wanted to make a bigger impact,” Brannan said. “I just wanted to be more of a listening ear or  helping hand. Show them that someone genuinely cares about what’s going on with them rather than just giving them some pills and leaving the room.”

Somedays, however, it’s a difficult task trying to juggle the demands of the profession with family and other life obligations. Her day doesn’t stop when she gets off and goes home, because she still has mom duties – feeding the kids, making sure they bathe and doing their homework.

“I’m a mom. I’m a nurse,” Brannan said. “A lot of times I find that I honestly neglect my own needs most days as I’m constantly worrying about the needs of someone else”.

Brannan raves about her coworkers and how they took her under their wing and showed her the ropes. There was never a time that she felt alone or didn’t have a good support system at work and it helped her grow and learn.  If she had trouble drawing blood on any of her isolation patients that had COVID, fellow staff would help and make sure she was OK.

“I was a 2020 graduate which was terrifying to be a nurse during COVID, especially in the ICU department,” Brannan said. “I can not thank all of my coworkers enough because they literally took me under their wing.”