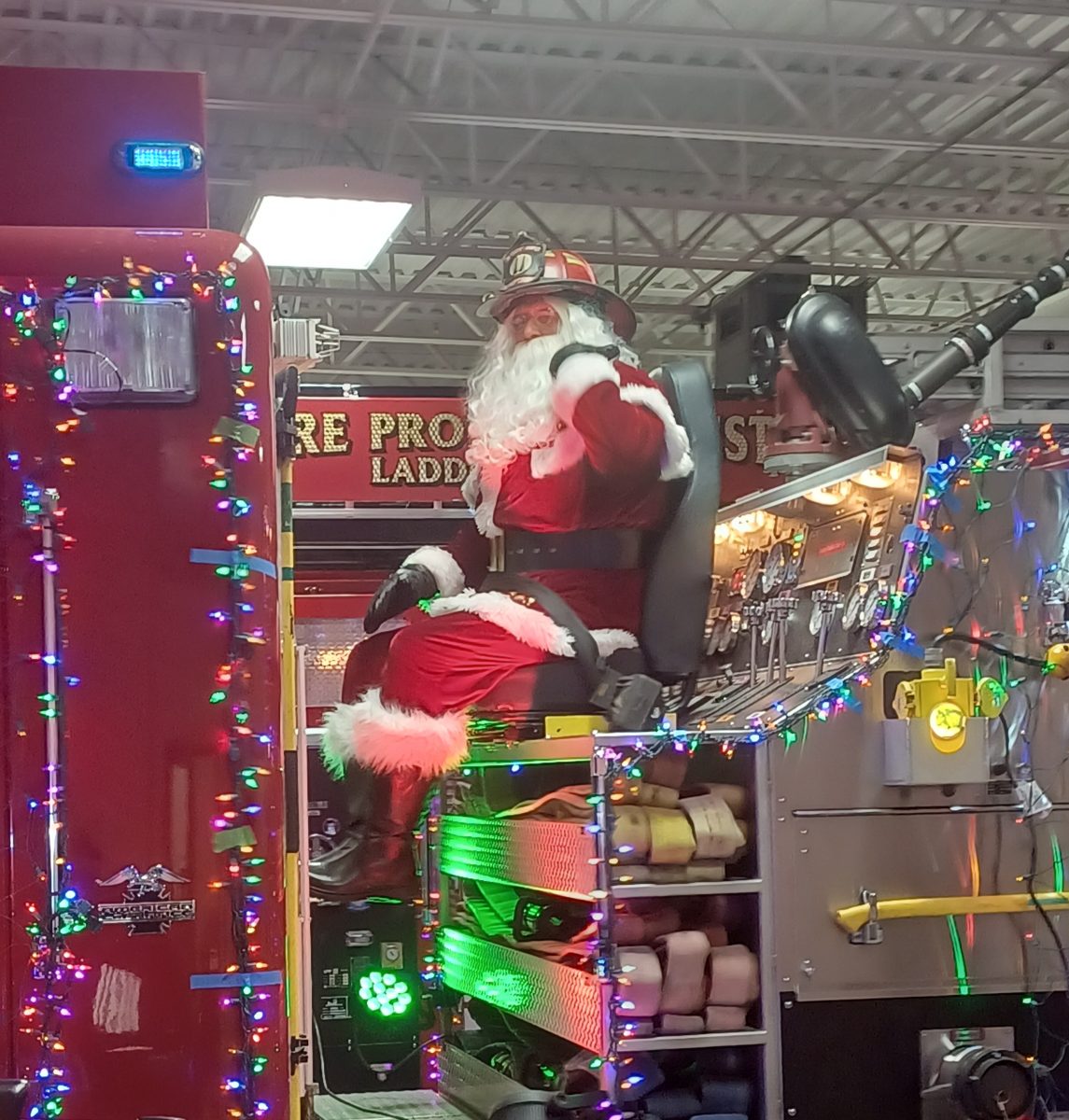 Santa Claus getting ready to head out toward his first destination, Photo by Devese “Dee” Ursery

Santa Claus took a ride through Troy on Wednesday evening, greeting kids and their families as they stood in their neighborhoods.

Led by Troy Police, St. Nick rode atop of a Troy Fire Protection District engine that was lit up like a Christmas tree. Followed by an ambulance, both with their horns and sirens blaring, they headed toward the Northwoods subdivision.

The route is given to the most experienced driver, and that has been Jeremy “J.J.” Busch, a firefighter for the department for the past seven years. James Williams, a Troy firefighter for six years, has played Santa for the past three years and said it’s exciting to see the community come out and support the event.

“It’s really exciting to see the community out there supporting us and kind of enjoying what we do for them,” Williams said. “It’s not only the kids that enjoy it, but a lot of adults enjoy it too. “We’re here for the community and to protect the district, but we also like to have some fun,”

Captain Mike Linenfelser said that the department has been conducting this event on a training night for the last seven years. He also discussed how the tradition was rekindled. It was done on the Friday after Thanksgiving previously, but that tradition stopped a number of years ago and then they started it back.

“It was actually a bet between firefighters,” Linenfelser said. “The bet was that we couldn’t talk the chief into getting the tradition started again, after a lapse of a couple of years. He didn’t think that we could get it done in a week. We got it done.”

Linenfelser said that the next year, the chief wanted to see if we could do it again. After seeing us do it again, the chief had the biggest smile on his face and said we’re never not doing this again. That was under Chief Rick McCurdy, Linenfelser continued.

Assistant Chief Ed Smith said the event has been going on for at least 20 years.

“When I got to the department 23 years ago, we used to take Santa around on Saturday and just continued since then,” he said.

The enjoyment was evident as a festive group of onlookers gathered at a corner along Santa’s route in Northwoods. There were more adults than kids in that particular group. Jordan, one of the adults in the group said “it was the most wonderful thing he has seen in his life.”

Williams said that they got comments from many other adults around the community that really enjoyed it as well. He added that the Grinch was added last year as a little something extra for the kids and to keep the community engaged while Santa’s riding around on the truck.

“Even some of the senior citizens said it made them feel like a kid again,” he said.”