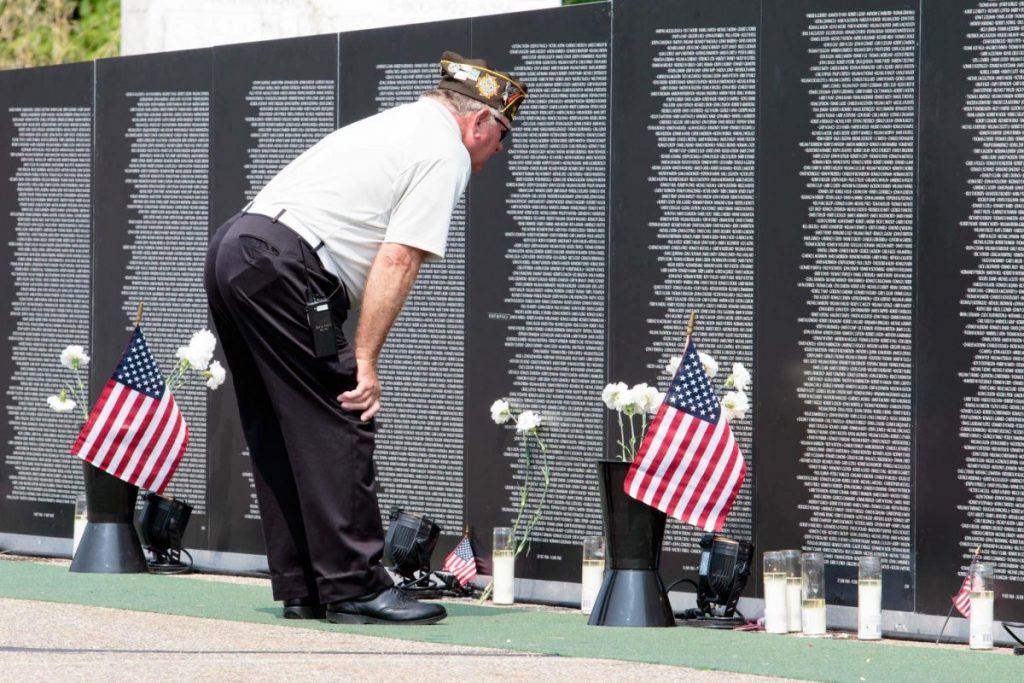 Many visitors from the readership area and beyond, such as this veteran, paid their respects in 2022 to members of the US Armed Forces as the Traveling Vietnam Wall made an appearance in Troy.

The year 2022 was a challenging one as the nation faced soaring inflation, the winding down of one of the worst pandemics in modern history and deep divisions on a host of issues.

Our small corner of the world in Madison County was far from immune to the events playing out on the national and world stage. But amid these challenges life in Troy and our surrounding communities carried on. To cap off our final edition of 2022, the Times-Tribune is taking a look back and summarizing some of our most read or commented on stories of the year.

Robert Tarr, who is charged with murder and other crimes in the November death of Troy businesswoman Leslie Reeves and shooting injury of Chris Smith, has his first preliminary hearing.

Triad saw the selection of a new superintendent. At the Jan. 24 board of education meeting it was announced Dr. Jason Henderson would begin the job in July.

Collinsville opened discussions on home-rule status, which would ultimately be kept in place by voters in the November election.

Madison County officials voted in January 2022 to not mandate Covid-19 tests or vaccines. The county also filed a lawsuit in opposition to legislation that divided the county’s judiciary into subcircuits.

A special Collinsville school board meeting was spurred by a court decision overruling Gov. J.B. Pritzker’s authority to mandate masks for students in Illinois public schools.

Collinsville school board members vote on Feb. 14 to end the mask mandate, adopting in its place a masks “strongly encouraged” policy.

The Troy City Council voted to allow golf carts and ATVs on city streets. Insurance is required and the vehicle must meet certain safety requirements, including an inspection by police.

For the first time since 1974 Triad High School has an IHSA State Champion wrestler. Sophomore Colby Crouch joined Fritz Nemsky on the exclusive list, taking home the 2A 120 pound crown

Stewards of Hope International, a nonprofit based in Highland, launches a fundraiser for the many displaced people heading to Poland to escape the war in Ukraine.

An emergency resolution was passed by Triad schools to repair the roof on Marine Elementary School, which started showing leaks after one of the severe storms earlier in February.

Danyiel M. Johnson is arrested on murder charges accusing him of killing Ronald L. Holland, 41, also of St. Louis, on March 17 behind a garage on North Bluff Road in Maryville.

Several speakers address the Madison County Board about leadership issues in the Troy Fire Protection District board.

Murder suspect Adam Cobb is killed by Illinois State Police after drawing a firearm on troopers a few hours after 30-year-old Jamie Joiner of Collinsville and sister Jessica Joiner, 34, of California were found dead near Collinsville.

A man reportedly steals hundreds of dollars worth of lottery tickets from Casey’s on Route 40 in Troy.

The Times-Tribune publishes an update on 48-year-old Chris Smith of Farmersville, who was shot the previous November by Robert Tarr, who also killed a Troy businesswoman. Smith spent seven weeks in intensive care as a result of injuries sustained in the shooting.

Many residents come out to enjoy the Memorial Day parade hosted by the Troy American Legion Post 708.

Troy City Council changes its meeting time from 7:30 p.m. to 6:30 p.m. on every first and third Monday of the month.

Collinsville High School alum Tanner Houck, the new closer for the Boston Red Sox, picks up his third save of the season by locking up the Cardinals slugger on a 3-2 fastball. Boston won 6-5.

Troy residents line Edwardsville Road on Monday July 4, from the I-55 exit past Riggin Road, not only to celebrate Independence Day, but the dedication of the new Field of Honor, a memorial to first responders and members of the U.S. Armed Forces.

Brentley Krimminger, 7, of  Collinsville takes first place in the Mission Foods American Motorcyclist Association (AMA) Flat Track Grand Championships on July 9, making this his second in a row for the 50 cc junior class.

Frederick Guy Patterson is appointed as the county’s emergency management agency director after a bit of a kerfuffle on the process.

Part of a statewide event, Troy Police post atop the roof of Dunkin’ Donuts to raise money for the Illinois Special Olympics.

Tri-Township Park in Troy is the site of a special barbecue competition hosted by the Troy-Edwardsville Shriners Club.

An off-duty Madison police officer is charged with three counts of aggravated battery by discharge of a firearm in connection with a shooting in downtown Belleville.

Stacey Pace of Troy is appointed, with a unanimous vote of support as the only nominee, to the position of vice-chairperson pro tem of the Madison County Board.

Michael E. Sloan Jr, 40, of Troy is charged with first-degree murder, assault, arson and other crimes in the death of Susanne Tomlinson, also of Troy.

The Traveling Vietnam Wall and other tributes to members of the U.S. Armed Forces come to Truck Centers Inc. Training Center at 2376 Formosa Rd. in Troy.

A police pursuit of a carjacking suspect ends in Troy with one person airlifted to a local hospital.

VFW Post 976 hosts Troy’s first Oktoberfest to raise money in support of the children and families of fallen veterans.

Knights soccer shutout the Eagles for the Sectional Crown.

Kiwanis Festival and Bark in the Park is held in Fireman’s Park in Maryville.

The Times-Tribune publishes an update on the case of missing man Richard Maedge after six months pass with no answers in his disappearance.

Triad football finishes the season with a 7-3 record following a 27-14 loss to Centralia in the postseason.

Troy murder suspect Michael Sloan Jr. is transported from the hospital where he was recovering from injuries sustained in an arson fire he is accused of setting and booked into the Madison County Jail.

Collinsville Food Pantry moves to a new home at Collinsville Crossing after 40 years in the basement of the First United Presbyterian Church.

Troy Police announce missing man Richard Maedge has been found, but withhold the location of his body.

Family members of RIchard Maedge speak at the December meeting of the Troy City Council, telling members that Maedge was found in his own home and criticizing the investigation.

On his 2nd trek across America, the anime-costumed runner Bearsun passes through Troy.

Football coach Paul Bassler steps down after 25 years at Triad.

Troy police take local children shopping for the holidays as part of the annual Shop with a Cop event.

Danyiel M. Johnson pleads guilty to murdering his friend in Maryville and is sentenced to 34 years in prison.