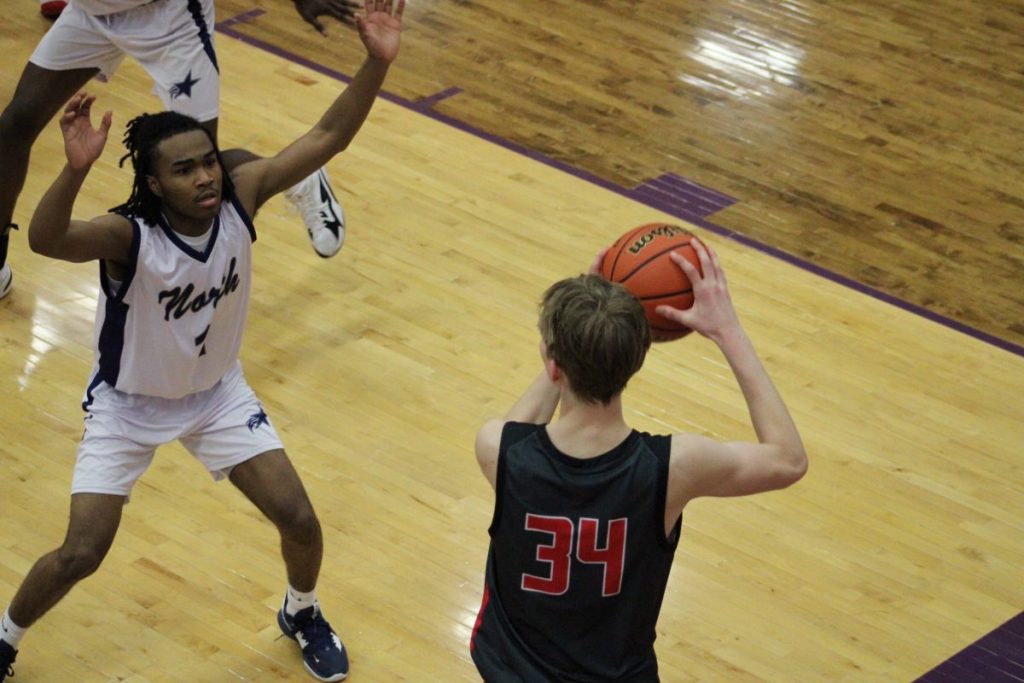 Wins do not come easy at Collinsville’s Holiday Classic and with this year’s edition using a shot clock, the challenge was even tougher.

Triad began their journey at the three day tournament on Dec. 28, when they faced off against the Tennessee based Collierville Dragons. One of the largest schools in their home state, Collierville High School has an enrollment of over 2800 students and entered with an 11-3 record.

The Dragons came out of the gate red hot, dropping 14 points. Triad’s offense got off to a less stellar start, shooting one for eleven from the field to trail 14-3 after one quarter.

Eight points from sophomore Drew Winslow gave the Knights signs of life in the second as his team tallied 19 points. Collierville once again scored 14 to maintain a 28-22 lead.

Jake Stewart scored a Triad best five points in the third frame, but the rest of the squad totaled four points. The Dragons once again outpaced them to expand their advantage to 42-31.

Another 14 point performance from Collierville in the fourth led them to a 56-47 final.

The Knights looked to rebound the following morning against the Alton Redbirds.

A 6-0 lead gave Triad an early lead, but Alton chipped away at their deficit and eventually took a 16-12 lead into the second quarter. In that subsequent period, the Knights led by as many as eight, but took a 27-23 advantage into the intermission.

With 4:07 left in the third, Alton would once again tie the game at 33-33. A layup from Winslow off an AJ Mills steal would push the Knights back into the lead, where they would stay until the final buzzer.

By the end of the fourth quarter, Triad moved on with a 58-48 victory.

Winslow scored 14 points, as did McGrady Noyes in the win. Noyes added 10 rebounds in the effort as well.

In a quick turnaround, the Knight’s consolation semi-final tipped off just five hours after their battle with the Redbirds. Triad faced off against the Althoff Crusaders in their second game of the day.

Five points from all-tournament selection Jordan Lewis was the difference in the opening quarter of play, with Althoff taking 16-11 lead through eight minutes.

Aydin Hitt found rhythm to start the second frame, going on a 7-0 run to give his squad a 18-16 lead. Four more second period points from the senior kept his team in charge for a 28-24 lead at the half.

The Knight’s lead expanded to 13 points at the end of the third quarter and the team led the entire second half for a 62-54 final.

Winslow once again led his team with 18 points and recorded 7 rebounds. Hitt tacked on 14 and Noyes added on 13 more.

“After that first round loss, I think our guys have their minds on getting two more and getting to that final consolation tomorrow. To get two wins again this year at this tournament is a big jump before us and that’s kind of the goal,” Coach Guidry said of his team reaching the consolation final with two wins.

Playing with a chance at their first trophy ever at the tournament, Guidry previewed the meaning of their subsequent game against McCluer North, “That would give us a lot of confidence going into the next part of the season. This is kind of the final stretch of the difficult part of the schedule we put together and hopefully lets us get ready. It’s going to be tough so we’ve got to be ready.”

The 7-5 Stars showed their skills early, shooting them out to an 8-2 lead five minutes into the action. Four buckets, including two from freshman Tyler Thompson, not only erased their lead but put the Knights ahead 11-10.

Both teams found themselves in a 17-17 tie halfway through the second period. From there, McCluer finished the half on a 7-0 run.

The dangerous momentum swing continued late into the third quarter, with Triad being outscored 18-1 to trail 35-18. An 11-3 run, featuring a pair of triples from Hitt, cut McCluer’s advantage down to 38-29 to end the third quarter.

A furious rally from the Knights pulled them within 45-44 with 59 seconds to play. Later with the same score, Triad gave the ball to Thompson in the corner after the freshman converted twice from that spot in the same quarter.

As the buzzer rang, the shot rolled through the air – but was ultimately denied by the rim.

“I’m proud of the way our guys fought back and performed in this tournament,” Guidry said after his team finished 2-2 at the Prairie Farms Holiday Classic.

Nine points from Winslow was once again a team high. His average point total over the four games eclipsed 16 points and earned the sophomore a spot on the hard to obtain all-tournament team.

“It’s really exciting,” Winslow spoke of being the first Knight to be chosen as among the tournament’s best since 2004.

The second year standout also became only the fifth Triad player to ever make the all-tournament team despite not being at one hundred percent, “I actually came into this tournament with a broken finger. So it’s really exciting to be able to do this.”