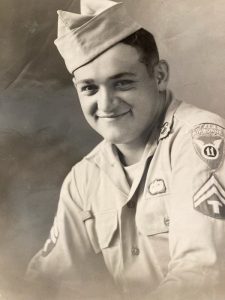 Pete grew up in Collinsville, attended McKinley Grade School, Webster Junior High, and graduated from Collinsville High School in 1946.  He enlisted in the U.S. Army and served in the 11th Airborne Division.  He was stationed in Japan during the occupation, and finished his enlistment at Fort Campbell, KY as General Staff Secretary.  After discharge from the U.S. Army, Pete joined U.S. Navy Reserves.

Following the military, Pete worked in Collinsville and the surrounding areas.  His employers included 10 years at Robertson Farm Supply at National Stockyards in East St. Louis, Interlocking Fence Company, Morton Building Sales, IGA Grocery Store in Collinsville, and the City of Collinsville as a meter reader and water department superintendent from 1981 to 1994.  Pete owned and operated North Towne Market from 1968 – 1975 and North Town Laundry from 1969-1975.

In public service, Pete served one term as a Collinsville City Commissioner of Streets from 1971 to 1975.  He also committed to the Cub Scouts and Boy Scouts as a supporter and adult leader.  At one time, Pete was a Cub Master for Troop 83 of more than 100 Cub Scouts.  In service to the Boy Scouts, Pete participated in national camping trips to Notre Dame, Canada, and regionally in Missouri.  He earned the “Walking Patch” for hiking more than 500 miles and was elected to regional and national offices.  He was honored by the Boy Scouts with the presentation of the “Order of the Arrow” award.

Pete was a Commander of the American Legion Post #365 in 1991 and worked many years at the legion fish fry.  He was of the Catholic faith and a member of Mother of Perpetual Help Catholic Church in Maryville.

A Celebration of Life will be held at a later date.

Memorials are suggested to Wounded Warriors and will be received at Barry Wilson Funeral Home, 2800 N. Center Street, Maryville, IL 62062.