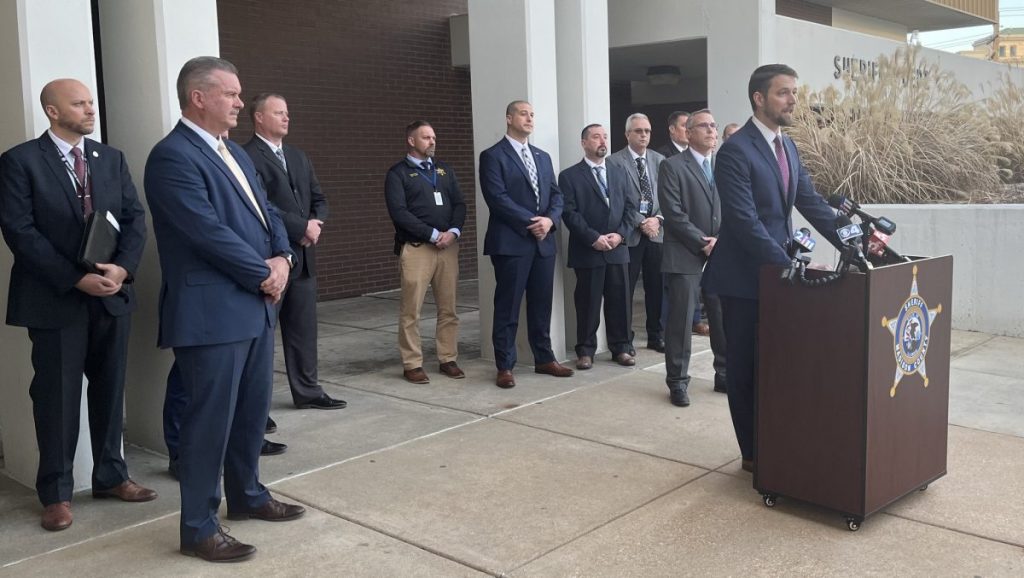 Local authorities hold a press conference following the death of a teen in Collinsville, the third homicide in the city on New Year’s Day.

Collinsville saw one of its most violent days in recent memory on the New Year’s holiday, with three people dead and three people now charged with varying felonies in relation to the two separate incidents.

Madison County State’s Attorney Tome Haine and the Major Case Squad of Greater St. Louis announced Tuesday afternoon the death of 18-year-old Miguel Villegas De Santiago. He was shot and killed around 2 p.m. in the 3300 block of Princeton Avenue in Collinsville.

“Although the community should know this is not an act of random violence, due to the sensitive nature of what is an ongoing investigation we cannot go into specifics,” Haine said. “Mainly our prayers continue today for the victim’s family. The victim was only 18 and his life was taken violently from him.”

Brian Koberna, a Madison County Sheriff’s captain and  deputy commander with the case squad, said authorities responded to a 9-1-1 call and found De Santiago, of Collinsville, in a vehicle with gunshot wounds. He was transported to a St. Louis area hospital where he died from his injuries.

Two men, both of Collinsville, have been charged in his death.

Matias L. Herrera, 26, is accused of driving the vehicle used in the incident and is charged with two counts of first-degree murder. His bond was set at $2 million.

It’s not clear if either suspect has an attorney to speak on their behalf. No date for an initial appearance was listed in online court records as of Thursday morning.

Authorities said the investigation showed Herrrera drove Campos on Sunday to the 3300 block of Princeton Avenue. Campos allegedly exited the vehicle and fired shots in the direction of residences and a vehicle. He then approached the vehicle occupied by De Santiago, firing several shots before fleeing the scene in the vehicle driven by Herrera.

While no homicide-related charges have been announced in that case so far, Collinsville Police said Wednesday that one man has been charged in relation to the incident with mob action, a class four felony.

Edgar O. Torres-Granado, 22, of Granite City, was arrested on a warrant for the aforementioned charge and posted a $50,000 bond. An initial appearance was not set as of Thursday morning and it’s not clear if he has an attorney to speak on his behalf.

It is also unclear if Edgar Torres-Granado is related to one of the men killed, who was identified as 24-year-old Rodolfo Torres-Granado, of Granite City.

He and 20-year-old Ricardo Correa, of Collinsville, were both pronounced dead by Madison County coroners at the scene of the incident, a parking lot behind Sloan’s Pub House.

Collinsville police in an earlier news release stated when officers arrived at the parking lot behind the pub they found two men unresponsive with gunshot wounds. Officers tried administering CPR as they awaited paramedics.

Witnesses said a fight broke out in the pub between one man and a group of men. The fight was broken up, but then reignited in the parking lot. A group of men, which included Correa and Rodolfo Torres-Granado, exited their vehicles armed with guns.

The group approached the lone male involved in the earlier altercation, who was sitting inside a Dodge Charger with a female.

The group allegedly tried breaking the windows on the Dodge and another fight broke out, witnesses told police. The man inside the Dodge then pulled a firearm, shooting multiple rounds and striking Correa and Rodolfo Torres-Granado, according to the release.