The new year brought in a new law for Illinois residents that encourages checking smoke detectors.

Public Act 100-0200, also known as the Smoke Detector Act, was passed in 2017 to reflect advances in alarm technology. The Act requires that all homes in Illinois be equipped with a 10-year “sealed battery” smoke detector by Jan 1.

The newly required smoke detectors are designed to last longer, with lower replacement costs and are less of a nuisance when cooking, according to proponents of the legislation. According to the bill, homeowners without an updated smoke detector will get a 90-day notice to get a sealed battery model. After those three months they can be fined up to $100.

While firefighters will not be knocking on doors to check for compliance anytime soon, Collinsville Fire Chief John Bailot says if first responders are already there, they will see if a working detector is in place.

“Whenever paramedic-firefighters are at someone’s home, if the situation warrants they will look to make sure there is at least one smoke detector,” Bailot said. We do not knowingly want any resident to go to sleep without working smoke detectors.”

Bailot added that each year across the country people are dying in residential structure fires that either do not have smoke detectors, the battery was removed or the battery is dead.

“Technology has changed over the years and now with the new detectors, the battery can not be removed,” Bailot said.

Depending on whether or not your smoke detector is in date, you don’t have to rush to change it. All smoke detectors, no matter the brand or type, have a manufacturer’s date on the back of the detector. The new law says that when a resident replaces their battery-only operated smoke detectors or when the detector reaches its 10-year mark, whichever comes first, it must be replaced with a new 10-year sealed battery detector.

“The general recommendation in the fire service has always been to replace your detectors in seven to 10 years,“ officials said.

“These alarms can cost anywhere from $15 to $20 a piece,” Zalenski said. “Your traditional 9-volt battery smoke alarms only cost about $5, but where you see the cost of savings with these new alarms is that you no longer have to replace the batteries as often.”

The Collinsville Fire Department has partnered with the Illinois State Fire Marshal’s Office to provide no-cost detectors to city residents in need. Collinsville residents who cannot afford a new smoke detector can call the fire department at 618-346-5022 for assistance. 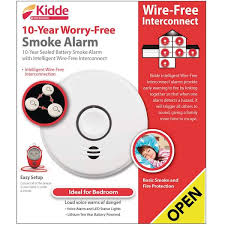 An example of a new smoke detector required under Illinois law.