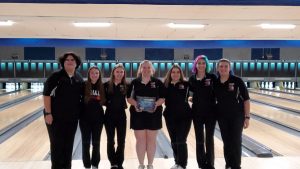 The Triad Lady Knights earned a first-place finish at the Jersey Panthers Bowling Invitational held at Tri-County Lanes in Jerseyville on Dec. 28. The team had a six-game pin fall of 4500 finishing ahead of second place Taylorville by 83 pins. The girls also competed individually with four bowlers finishing in the top 10. Junior Ava Burrelsman finished 10th with a six-game series of 881, Senior Kaylee Broadfield finished 7th with a 923 series, Senior Haylee Harper took second place with a total pin fall of 1000 and Junior Brylee Proffitt took first place with 1045. Also knocking pins down for the girls second place finish was Sophomore Ru Fuller with a high game of 153 and a three-game series of 377. Junior Clara Doubet and Sophomore Riley Reeves had a combined series of 171.

Both Triad Girls and Boys bowling teams competed as a school in this tournament with a combined pin fall series of 9948, finishing second, only seven pins behind the Jersey Panthers combined series of 9955.

The Lady Knights have upcoming match play against the Jersey Panthers Thursday, Jan. 5 and also are competing in a tournament on Jan. 7 in Carterville.