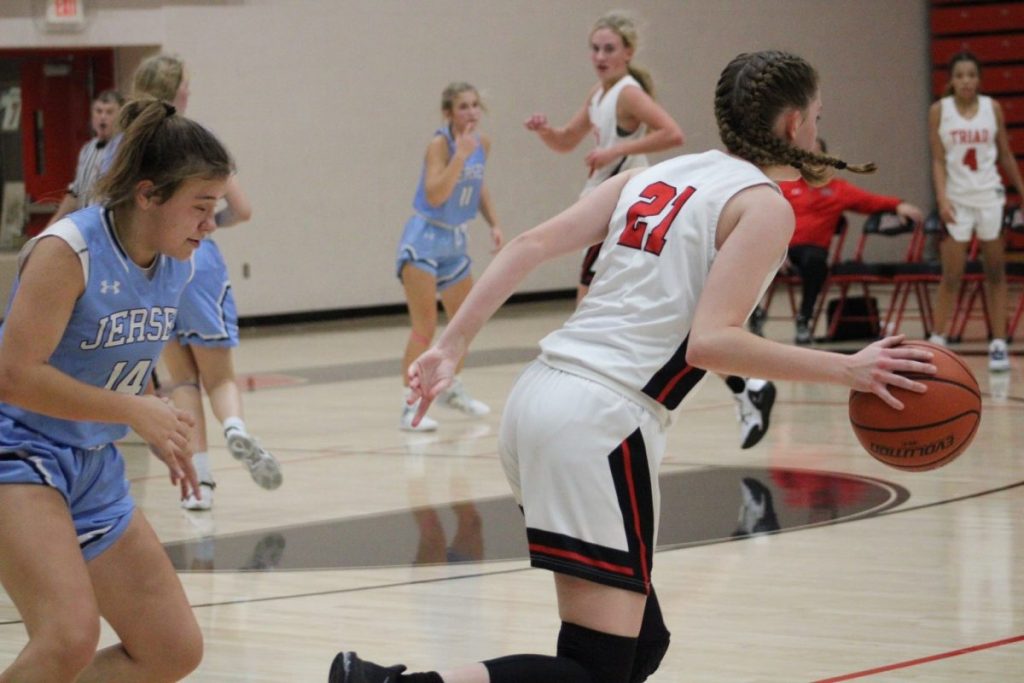 Savannah Hilderbrand drives towards an opening against Jersey. Photo by Anthony Jones

Coming off a 2-2 record at the Benton Christmas Classic, Triad girls hoops looked to roll their momentum into a Jan. 5 battle with the Jersey Panthers. Their hosts had built recent momentum of their own, with four consecutive victories to improve to 11-7 overall.

Mississippi Valley standings were also on the line, as the Lady Knights stood in fifth place thanks to an earlier season 55-48 decision over the Panthers. Their Jerseyville-based opponents held a 0-5 record in league play headed into the night.

With 3:09 left in a competitive quarter, Triad took their first lead of a 7-6 off a Maddie Hunt layup. Both teams would end the first period with 10 points.

Three treys from Savannah Hildebrand pushed the Lady Knights out front 19-16 with 2:51 remaining in the opening half. The sophomore’s three long range shots would prove to be her team’s only offense in the second frame however and a 9-0 run gave Jersey a 25-19 intermission advantage.

Makenna Witham tallied four points to draw Triad within 27-25 out of the half, but another Jersey rally erased their work. While Witham scored two more points in the third, the Panthers combined for nine to lead 36-27.

Key baskets, such as a triple from Hildebrand, pulled the visitors within 37-36 with five minutes left in the league battle. A floater from Hartoin gave Triad their first lead of the second half at 38-37 midway through the final section of play.

As they traded shots with Jersey, Hildebrand and Witham landed baskets to regain the lead several times in the fourth. The last of which came when Hildebrand pushed her fourth quarter total to eight points for an and one with 54 seconds left. This pushed Triad ahead 45-43.

A 5-0 run that saw a corner three and two last second free throws pulled Jersey ahead to a 48-45 win.

The Lady Knight’s three point loss is the only one possession game the Panthers have played since Dec. 27, where they have won six consecutive.