Over the last 47 years, only two men have held the title of Triad head football coach. 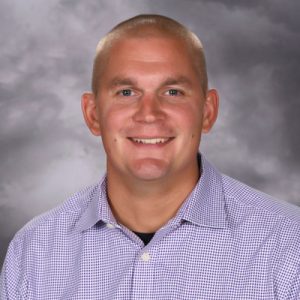 The former of those two was Ed Cange, who recorded 96 wins over 22 seasons. Paul Bassler, who announced his resignation from the role after last season, followed Cange with a 152 win run that spanned a quarter of a century.

Now, Calvin Potthast will get a chance at the helm of the gridiron Knights.

“It means a lot. It’s always been a dream of mine and it’s exciting to see it all come together,” the 33 year old new hire said.

After being announced as the new man in charge on Jan. 9, he held his first team meeting just two days later.

Potthast described his first meetup as head coach, “I laid out the culture for what I want the Triad program to look like. We want tough and hard working kids.”

There were plenty of familiar faces around for the new captain, who has spent the last eight years on the Triad coaching staff.

Athletic Director Kenny Deatherage discussed why Potthast stood out among the applicants for the job.

“Calvin has a passion for football and a drive for success. His excitement and vision for the future of Triad football in this community was infectious. I am really excited to get to work with him as he begins his head coaching career!” Deatherage stated about the recent hire.

With Triad, a strong foundation has already been laid with a 15-6 record over the last two seasons. The Knights have appeared in seven of the last eight IHSA postseasons as well.

But Potthast has plans to take Triad’s success to another level.

“My main goal is to win a state championship. We’re not that far off, but there is work to be done,” Potthast said of his ambition to deliver the first championship for a Triad boys team.

His philosophy to grow the Knights to another level is simple.

The longtime linebacker coach detailed his coaching philosophy, “We want to put our players in the best position we can and play to the strengths we have. Triad is athletic and strong. We want to make big plays.”

He also envisions Triad employing a different offense than fans may be used to.

“We will not be running the triple option. I want to run an offense with what I know and know well. We are going to run a multiple spread offense.”

Potthast detailed his plans to install the offense in an effective manner, “Coaches Johnson and Zobrist are going to start having weekly meetings with me about how to install the offense and to build a playbook. We want that to be a community playbook for everyone, from varsity to freshman and all the way down to the Titans.”

As far as his first season at the helm, Potthast laid out his immediate goals.

“We want to get our new offense installed. We want to play hungry and energized to get our culture established at Triad.”