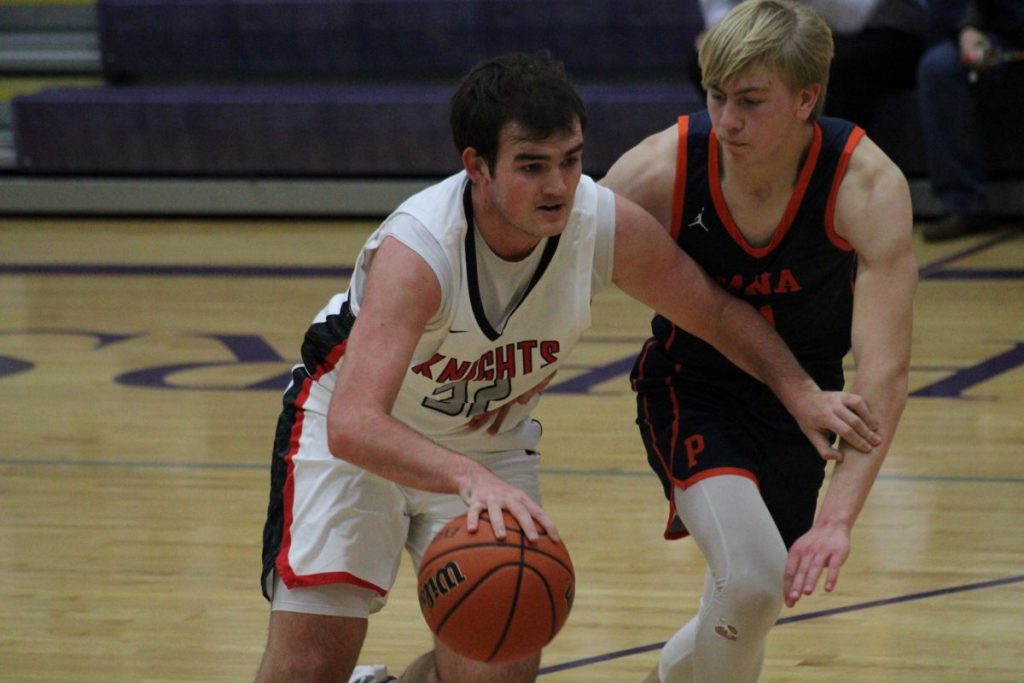 Photo by Anthony Jones: Triad senior AJ Mills drives to the hoop during his fifteen point performance against Pana.

Since the calendar has turned to 2023, Triad’s defense has been a formidable front.

“Coming out of Collinsville and playing against those fast, aggressive teams I think made us a better defensive team. We know that defense is what’s going for us. It’s just about effort and mentality,” Coach Guidry provided insight on what has made the Knights stingy in recent action.

In the first three games of the calendar year, they surrendered point totals of 23, 20 and 38. Those strong defensive outings lead to big wins over Jersey, Alton and Freeburg.

Their best defensive performance yet came on Jan. 13, as the squad visited the Waterloo Bulldogs. That Mississippi Valley bout served as a rematch for an earlier season 48-35 win for the Knights.

Triad dominated the first half, catapulting ahead 19-6 in the first quarter. They held Waterloo scoreless in the second quarter, while extending their lead to 32-6.

The lowest Waterloo had scored this season prior to the loss was 29 points.

After both players went 3-3 from beyond the arc, Tyler Thompson and Aydin Hitt led Triad with 11 points each. Jake Stewart added on nine more, while McGrady Noyes and Owen Droy each tallied eight points.

As Highland defeated Mascoutah the same evening, Triad moved into sole possession of first place in league standings. Their record in MVC action stands at 5-1.

Coach Guidry talked about taking over the conference lead, “I think the guys realize at this point they control their destiny. We got a little help and at this point it’s one game at a time. They’ve got to understand every game matters when it comes to the playoffs or conference.”

The following afternoon, the Knights hit the road for the Rick McGraw Invitational at Litchfield. As the top-seeded team, Triad opened play against the Pana Panthers.

A triple from Pana gave them a 7-5 lead early in the first, but this would mark the first and only time the Panthers held the lead. Triad finished the first quarter on an 11-2 run that was kickstarted by a Noyes bucket.

Led by two threes from Hitt, the Knights rolled their momentum into the second quarter with an 8-0 run. Pana was outscored 16-8 in the remainder of the half, including a buzzer beater from Stewart near half court.

Scoring slowed in the latter half, but Triad continued building their lead. At the end of the third quarter they led 52-20 and ultimately won 62-25.

The win pushes Triad to 15-5 on the season, while allowing an average of 24.2 points in their last five games.