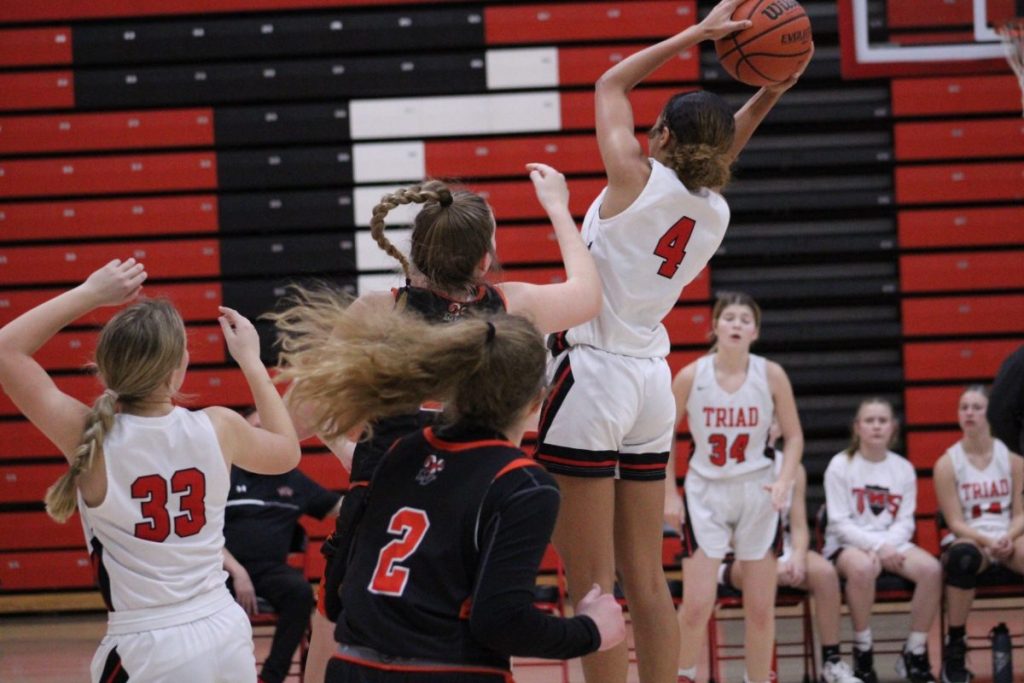 Their first foe in the stacked lineup was the Mt. Vernon Rams, who visited Triad on Jan. 10. The visiting Rams held a 14-4 mark prior to their meeting.

Seven of the game’s first ten points went to the visitors, but their early lead would not last long. Savannah Hildebrand sparked a subsequent 11-0 run with a trio of threes, giving the Lady Knights a 14-7 advantage.

It would be over eight minutes of play before Triad would score again, when a Maddie Hunt free throw tied the contest at 15-15. Only six more points were scored in the first half, leaving Mt. Vernon with a 19-17 lead at half.

One of the keys to Triad’s strong start was their ability to handle the Ram’s defensive style.

“We handled their press really well and that’s how they destroy teams. They’ve been beating teams by 30-35 points. They’re really good for a reason and their pressure really bothers teams, but we did a really good job of handling their pressure and they took it off eventually,” Coach Josh Hunt said of his team’s success against tight defense in the first half.

The third quarter started with a triple from Hunt and ended with another from Hildebrand, but Mt. Vernon controlled all of the scoring in between. Triad’s scoring drought put themselves on the wrong side of an 8-0 run and down 28-23 headed to the fourth.

Makenna Witham kicked off the final period with three free throws and an assist on a Sam Hartoin triple, giving Triad another lead at 29-28.

After finding her mark five times from deep, Hildebrand finished with a team-high 15 points in the loss. Hartoin added on eight more points and six rebounds in the non-conference matchup.

Back in action on Jan. 12, Triad paid a visit to the Waterloo Bulldogs. Prior to their Mississippi Valley matchup, the Bulldogs touted a 12-6 mark.

A commanding 13-5 first quarter put Waterloo in the driver’s seat early, but Triad still showed signs of life. A 6-0 run, with buckets from Delaney Hess, Hartoin and Hunt, pulled the visitors within 15-11 with 4:55 left in the half.

The third place team in the conference race responded with a run of their own, finishing the second quarter with a 9-1 run. This increased their lead to 24-12.

The night’s third quarter was the most balanced frame, with Waterloo tallying 12 and Triad 11. A successful fourth quarter for the Bulldogs delivered a final tally of 44-27 in their favor.

Hartoin finished with a solid statline of 11 points and seven boards in the defeat. Six points from Hildebrand made her the next best scorer.

Closing out their challenging week, Triad opened play at the Highland tournament on Jan. 14. Opposing the Lady Knights was a 19-0 Alton squad ranked fourth in the most recent AP rankings for class 4A.

The state ranked Redbirds flew in the opening eight minutes, taking a 16-5 advantage. Triad responded with 10 points in the second quarter, but Alton grew their lead with 13 tallies of their own.

Alton dominated the second half as well, arriving at a 56-19 victory. Hess scored a team-best five points in the losing effort.

The Lady Knights dropped to 3-16 with the loss and are set for a Jan. 16 contest with Waterloo in the second round of the tournament.