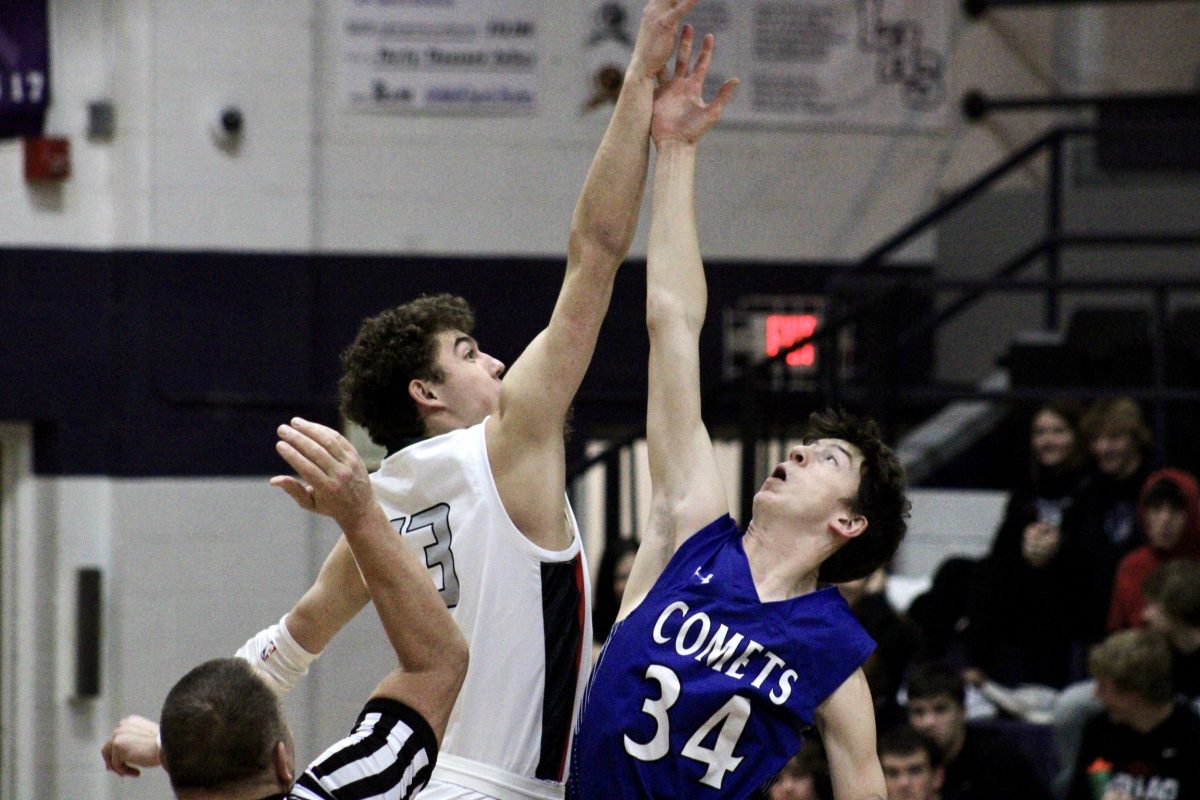 Photo by Anthony Jones: Tournament MVP McGrady Noyes reaches for the sky during tipoff against Greenville

After a 62-25 drubbing of Pana on Jan. 14, the Knights rolled into last week with a 1-0 mark in pool play. That undefeated mark was quickly put to the test with a Jan. 17 meeting with the Mattoon Greenwave.

A 20-3 first quarter catapulted the Knights ahead of their Apollo conference opponent, resulting in a lead they would never relinquish. Their lead swelled to 36-17 at the half with continued dominance on both ends of the court.

Another scoring drought for Mattoon came in the third quarter, where they totaled just four points. Triad’s offense continued to fire on all cylinders and took a 53-21 advantage into the final eight minutes of play.

The gap was closed in the final frame of play, but the Knights left with a 61-33 final. McGrady Noyes scored a game-high 19 points, with fellow senior Aydin Hitt adding 15 more.

Mattoon’s only player to surpass four points was Andrew Wetzel, who finished with a dozen.

Within minutes of tipoff, the Knights charged out to a 17-2 lead. Five points each from Noyes and Drew Winslow carried the hot start.

The Comets found their offensive footing to end the quarter to narrow their deficit to 20-9. Greenville’s momentum carried them to 13 second quarter points, just behind the 15 the Knights scored.

With four converted triples, Hitt was the game’s leading scorer at intermission with 12. Noyes added on seven more for the Knights.

Noyes added to his total in the third quarter, doing all of Triad’s scoring during a 7-4 run. His squad would ultimately score 19 points in the period to go ahead 54-38.

After the dust settled in the fourth quarter, the Knights advanced to the championship thanks to a 65-44 final.

Hitt finished as the victor’s leading scorer, with 20 points and six made threes. Eighteen more points came courtesy of Noyes.

“It was good that Aydin picked us up tonight. I don’t think we came out defensively like we planned or wanted to. Our plan was to come in and keep them shooting threes, which I think we did a pretty decent job of. But we got beat off the dribble a lot and that caused a struggle, so thankfully Aydin stepped up and McGrady did his job on the offensive side again,” Coach Guidry said of his squad’s semifinal outing.

Guidry did see upside in his team allowing more points than their previous games in 2023 however.

He explained, “I think we needed something like this to show that we still need to get better. Defensively, I just didn’t think we were at the bar tonight.”

A familiar face awaited Triad in the Jan. 21 championship game – Civic Memorial. In their previous meeting, the Knights pulled away in the second half for a 46-37 victory.

With a minute left in the first quarter, Civic Memorial started an upset bid with a 9-6 lead. Late layups from Jake Stewart and Drew Winslow pushed the Knights back ahead 10-9 at the end of the quarter.

The first ten points of the second half all went in Triad’s favor, before a Civic Memorial bucket pulled them within 20-11. But the Knight’s momentum did not die there.

With buckets from Stewart, Winslow and Noyes, the final ten points of the half all went in the Knight’s favor for a 30-11 lead. Stewart had a team-high nine points and Winslow was just behind him with eight.

Civic Memorial outscored Triad in the second half, but their 29-28 performance was far from enough to close the gap. The championship finished 58-40 in favor of the top seeded Knights.

Winslow, a sophomore, finished with a game high 17 points. Fellow underclassmen Tyler Thompson finished with 13 points in the title game.

In addition to taking home the team title, three Knights finished on the all-tournament team. Hitt and Stewart both were given this honor, while Noyes was named tournament MVP.

Triad will look to continue their eight game winning streak into a week of games that features Ladue, Civic Memorial and Centralia.

Coach Guidry previewed his team’s Jan. 24 trip to Ladue, where he previously was on the coaching staff, “That’s an exciting matchup. They’re obviously a really good team this year and it’s going to be a different style to play than what we’re used to. They’re kind of an in your face press, run up and down fast team and we’re kind of a half court physical team, so we’re excited about it. I think it’ll be a great challenge for us, especially this time of year when we’re getting ready for the playoffs.”