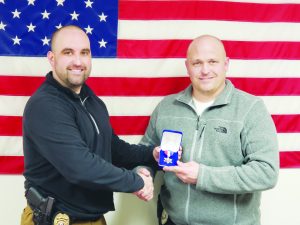 Marine – Marine police officer Joshua Jordan received the Lifesaving Award from police chief Chris Singleton at the February 6 village board meeting. Singleton commended him for his rapid response to a cardiac arrest with the Automated External Defibrillator (AED).

Singleton also praised the department for their recent rapid apprehension of a residential burglary and car theft suspect.

“He was identified within twelve hours and taken into custody,” Singleton said.

Two members of the Marine Sanitary District, Richard Riebeling and Bob Bassett, attended the meeting to request a temporary loan from the village to begin repair work on the sewer lines.

The sanitation district and the village water and sewer departments are different entities but they are both in charge of the sewer system.

Mayor John Molitor was present at the January 25 sanitary district meeting, at which they discussed the need for sewer system improvements.

Bassett said that it was a tough decision for the board to make because it raises tax money.

“We want to keep the residents informed,” Bassett said.

The funding measure to increase the tax levy on the sanitary district will be on the ballot in April.

All were in agreement that the lines need to be worked on.

The first step of the project requires assessment by an engineering firm, for a fee of approximately $80,000. The initial process, termed “cameraing,” involves making a visual inspection by looking inside the existing pipes with a specialized camera.

The mayor said that to complete the necessary relining he expects the project to cost a minimum of $1 million, and he would like to expand the system to cover the in-town residents who don’t have service which would bring the total closer to $2 million.

Water and Sewer Committee chairman Terry Gergen made a motion to provide a temporary intergovernmental loan of $80,000 to the Marine Sanitary District from the Water and Sewer funds. The motion carried unanimously, with trustee John Usher not present at the meeting.

Streets and Parks chairman Bill Ferris brought Resolution 2019-1 to the table, requesting $15,000 in PEP Grant funds to replace park benches and tables and seal the paths, authorizing the mayor to apply. The resolution passed with no opposition.

Also on the agenda was a revision to the rental fees at both the village park and Heritage Park. The board approved the proposal to make the fees a uniform $25 for each of the following: renting pavilions, the gazebo, the serving area, and to acquire keys. Upon returning keys and leaving the areas clean, residents may have their fees refunded. The fees will be non-refundable for non-residents.

The trustees voted in favor of installing an LED light on East Magnolia at the Marine Coin Company site. There was some discussion of whether it would be wise, with the mayor noting that installations increase the cost and the police chief along with Police Committee chairman Steven Bartlett raising safety concerns. Singleton pointed out that it is a dark area and it would benefit everyone to have more light there when events are held in the park. The roll call vote passed with Ferris voting no.

Bartlett reported that Keith Alldredge has retired as chief of the Fire Department, having served on the department for 38 years with 21 years as chief. He said that Daren Kessinger will step up to head the department. Bartlett will serve as assistant chief.

Bartlett also reported that they are preparing vehicles to put up for sealed bid in the near future. There was some discussion of including a diesel mower in the bid list.

Village resident Lynn Scherer gave a short presentation of a website he is developing as an unofficial hub for Marine village information, news, and other articles of interest. There was some concern about confusion between having both an official and unofficial site. Scherer said that he has designed a large red button directing visitors to the official site. As a result of discussion centering on typographical and other errors on the official village website, www.villageofmarine.net, Village Clerk Amber Kapp said she would reach out to the web developers to correct and update the official site.

The formation of a 2020 Census committee was also on the agenda. It was pointed out that the reported median income of village residents affects the amount of grant money for which the village is eligible. Appointing a liaison was discussed, but no action was taken and the issue was tabled for the next meeting.