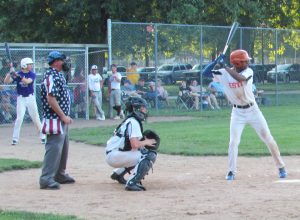 A batter in the All Star MERBL game this past Saturday waits for the pitch. Photo by Anthony Jones

The 21st Annual MERBL All Star game was played Saturday at 5 pm at Moody Park in Fairview Heights.

The matchup was the National League versus the American League, with each side being managed by the coach with the best record in their respective leagues.

In accordance with that rule, John McNamara was at the helm for the American League while Steve Kienle was his National League Counterpart. The All Star game also featured other special caveats such as allowing only one inning per pitcher as well the game being 9 innings long.

As they have done in the past, the league asked for donations of 2 items from all attendees for the local food pantry.

The American League All-Stars played the role of the away team and wasted no time getting on the board as Jordan Slay singled from the number 2 spot.

Slay then successfully stole second, where he was able to score the first run of the game as Xavion Jones singled.

The National League settled down and halted their opponent’s offense before anymore damage could be done.

Andrew Quandt came to the plate for the National League with one out and made contact to earn the first hit for his team, but it was to no avail as his team could not drive him home.

The American League started the second inning off with two outs, but managed to draw 5 straight walks and earn 2 runs from Kaleb Tieagel and Dillon Fults before the 3rd out was made.

The National League’s responding turn at the plate was explosive but short as Brett Paubel led off with a single and was followed up with an inside the park home run from Devon Similey.

The National League dominated the 3rd as they shut out their counterparts and received runs from Brandon Bennett, Jacob Cange, Steven Nungesser, and Drake Huchel to take the lead 6-3.

Neither team plated any runs in the 4th or 5th innings but the 6th inning provided more action. The American League got a spark from Jacob Busttner, who hit a leadoff double. Christian Adams followed up by drawing a walk. Busttner shaved a run off the deficit by stealing 3rd and then advancing home after a throw down to 2nd was overthrown. Jeff Claxton arrived to the batter’s box next where he drew a walk and he stole 2nd after Jones stole 3rd. In a big moment, Kaleb Tieagel singles and drove in both runners on base.

Tieagel stole 2nd and then 3rd, which allowed him to score as Dillon Fults singled. The National League managed to earn a 3rd out before Fults could score. Paul Falbe started things off for the National League with a single and then a steal of 2nd.

Another walk was earned by Brandon Bennett.

Falbe stole 3rd and an errant throw that was intended to catch him stealing allowed both him and Bennett to touch home plate before the inning was over.

Playing stout defense, the National League did not allow their foes any more runs in the top of the 8th. Drake Huchel and Zach Smith both drew walks to put two runners on base. Elron Rodriguez was hit by a pitch to load the bases for Demarion Cotten. Cotten was issued a walk, which brought in Huchel for a run.

The next batter was Jacob Tourville, and during his at bat, both Smith and Rodriguez scored on a passed ball. Tourville hit a ball that dropped for him to reach 1st, but that was the last offense for the National League.

The American League trailed 13-10 entering the top of the 9th and Zach Breasl was walked to start the final inning.

Two strikeouts followed before Austin Armor singled to bring the tying run to the plate.

To keep the game alive, Ryan Lehine hit a single to bring in Breasl. The game winning run was brought to the plate in the form of Alec Bissey.

Ultimately, the National League held off the rally by striking out Bissey to win by a final score of 13-11.