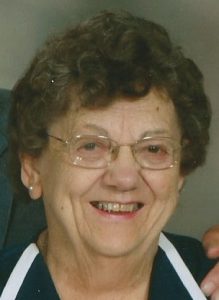 Helen was a member of St. Boniface Catholic Church in Edwardsville, the Daughters of Isabella O’Reilly Circle, Pin Oak Senior Citizens, St. Boniface Quilters, St. Boniface Cemetery Board, Madison County Home Extension and the Madison County Farm Bureau Women for Ag. She always considered herself a city girl turned into a farmer’s wife. She was a stay-at-home mom who raised all six kids in the rural area and never drove a vehicle in her life. Helen was also the bookkeeper for their business, Hank’s Blacksmith Shop.

She enjoyed being a seamstress, and made wedding dresses for all of her daughters and daughter-in-law. She loved cooking and canning (her specialty was homemade banana bread and jelly for all the children and grandchildren at Christmas), and enjoyed bingo, travel, playing Yahtze with her grandchildren, card playing, dancing and teaching many how to Polka; and she enjoyed praying the rosary. Helen was also a 37 year breast cancer survivor and was active in Relay for Life.

Visitation was held on July 11 at St. Boniface Catholic Church in Edwardsville.

A Mass of Resurrection was held on July 12 at the church, with the Very Rev. Jeffrey, Pastor, officiating. Burial will be in St. Boniface Catholic Cemetery in Edwardsville.

Memorials may be given to Hitz Memorial Home or Fr. McGivney Catholic High School.

Friends may register online at www.KalmerMemorialServices.com .

Kalmer Memorial Services in Lebanon was in charge of arrangements.