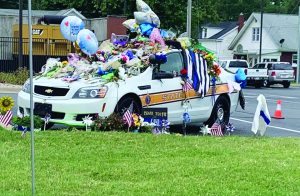 Local Law Enforcement Officers in Troy, Collinsville, and throughout the Metro East paid their respects to ISP Trooper Nicholas Hopkins during visitation services on Saturday,  Aug. 31 from 3-9 p.m., and funeral services on Sept. 1 in Waterloo.

Hopkins was killed on Aug. 23 while on duty and serving a warrant in East St. Louis. He was a 10-year veteran of the Illinois State Police.

The Troy Police Department expressed its condolences in a social media post the day Hopkins was killed.  “Our concerns and prayers go out to our brothers and sisters with the Illinois State Police,” it said. Several Troy officers were at the funeral.

The Collinsville Police Department likewise expressed sadness with the initial news of Nicholas’ death, and expressed sympathies to his family.

A subsequent Facebook post on Aug. 29 stated: “We have been uncharacteristically quiet for the past several days as we have been taking something akin to a moment of silence out of respect for our fallen brothers and sisters. It has been a rough week for everyone in the law enforcement family. Five of our fellow officers have passed away in the last seven days. Nobody likes a funeral but funerals are especially difficult when it is for a fellow law enforcement partner whose life has been cut short in the line of duty. Illinois State Police Trooper Nicholas Hopkins will be laid to rest this weekend in his hometown of Waterloo, IL. We express our deepest condolences to his family. Be kind to one another and be safe.”

Hopkins was born in Red Bud and great up in Waterloo. He began his career as a cadet at the Illinois State Police Academy on June 1, 2009.