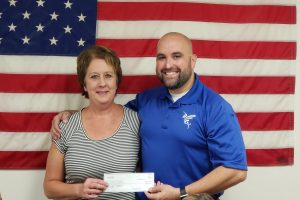 Pam Voegele, organizer of the fourth annual Chillin’ and Grillin’ event held on the second weekend of August to benefit the Marine Police department, presented police chief Chris Singleton with a check for $8,000 at the September 2 village board meeting.

“Thank you for letting us use the park. We had a really good turnout,” Voegle said. “We’d like to do it again next year on the same weekend if possible.”

“Thank you for all the work that goes into it, and thanks so much for all you do for us,” Singleton said.

The police chief presented the board with a letter of resignation from Lieutenant Howard T. Chamberlain, who will be retiring from the department effective November 1. Singleton said that he will be looking at candidates from the police academy and a new person will need to be hired.

In other police news, the chief reported on four felony arrests, trustee Steven Bartlett passed along compliments for the department and also reported that the department was approved for the US Department of Justice Vest Grant. The grant pays $2,142.42 which is fifty percent of the cost and the village will need to fund the remainder.

The board voted to adopt Ordinance 750, amending chapter 27, Section 27-2-35 to prohibit the sale of cannabis products in the village.

The board discussed entering into a contract with an IT (Information Technology) company to handle the installation of POTS in a Box (Plain Old Telephone Lines) and to do quarterly maintenance for the office computers.

“I think it’s time we set something up,” Mayor John Molitor said.

Trent Laughlin of LMD Solar gave a presentation to the board on the shade study for the solar panels that are to be installed in Village Park. He brought forms for the mayor to sign and the board approved the application fees totaling $1,764.50.

Parks Department chairman Mark Voigt told the board that the proposed dimensions of the new pavilion have been reduced to 40 x 72 feet, which cuts the cost of the footing by about half. He said that the basketball court, which will be turned into a half-court, will retain the plaque from the Lions Club which originally installed it.

The trustees voted in favor of getting bids for the unused John Deere tractor. The mayor said that he would provide details of the year, make and model so that it can be advertised.

Trustee Rae Lynne Meyer thanked everyone who helped with the balloon festival.