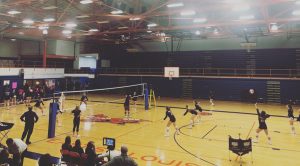 Collinsville volleyball team put together a four game winning streak at the end of the season to raise their overall record to 16-17.

Last Thursday they defeated East St. Louis 25-18, 25-16 to raise their Southwestern Conference record to 8-6 on the year..

“East St. Louis has the best team they’ve had in a while. I thought our girls did a great job of coming out ready to go,” said coach Abby Hanger.

“We spread the ball out really well. All of our setters and hitters connected very well. We also served really well which is something we’ve been focusing on,” said Hanger.

Elise Halbrooks and Hannah Scrum had six digs each while Lauren Fortner had five.

“That was our senior night and all the girls were super excited. We definitely had a little extra energy that night. Everything was working. We were putting the ball away, we were passing really well, we were serving really well. It was nice to end our seniors’ career there (at Fletcher Gym) on such a high,” Hanger said.

One day prior to the Columbia game CHS hosted Freeburg and came away with a 25-16, 25-8 win. Scrum had 10 kills, while Mitchell added nine. Metzger had seven digs and Halbrooks added 25 assists.

“I think we got off to a really good start, they’re a very good team. It’s the first time we beat them since 2007. The girls just came out really confident again. All the little things we’ve been working on all year, you could see started to go our way. We didn’t ever really play outside the moment. We played point for point and we just focused on getting better,” commented Hanger.

October 17th saw Alton come to Collinsville for an SWC tilt. The Kahoks came away 25-11, 25-19 winners. They had yet another dominant performance with a 26-12 advantage in kills.

Scrum had five kills while Halbrooks had 11 assists.

The Kahoks began post season play Tuesday at Alton against O’Fallon. Results of the match were unavailable at press time.

The Winner from Tuesday plays tonight in the championship at 6:00 p.m. in Alton.