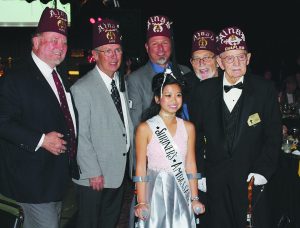 Representatives from the Troy-Edwardsville Shrine Club pose for a photo with Shriners Hospital Patient Ambassador Keira Cromwell at the Night of Rock Stars, presented by Re/Max Alliance Community Team and held at the Gateway Convention Center in Collinsville on Oct. 25. See page 16 for more photos. Photo by Steve Rensberry

An estimated 600 guests and participants — nearly twice as many as the year before — attended the Night of Rock Stars event presented by the Re/Max Alliance Community Team this past Friday.

Highlights of the event included the arrival of the children as they walked the red carpet, followed by a musical performance by each of the 12 children, with each Rock Star accompanied by the band Frankie Says Relax, led by Mike Bellovich.

Master of Ceremonies for the evening was Remy, of  “The Mason & Remy Show,” New Country 92.3. Owners Tammy Anderson-Owens and Mike Owens both addressed the large crowd, with the National Anthem sung by Shriners Hospital Ambassador Keira Cromwell, and the Presentation of Colors by the 3rd Battalion, 383rd Regiment, from Jefferson Barracks.