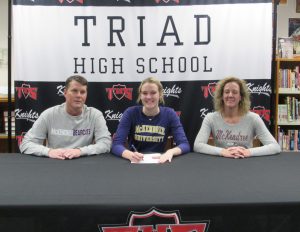 Lauren McCurley is pictured above signing her national letter of intent to play college volleyball for McKendree University. She is pictured alongside her parents Doug and Michelle. (Photo by Steve Rensberry)

Lauren McCurley signed her nation letter of intent this past week. She signed to play volleyball at McKendree University. McCurley is currently a senior at Triad High School.

Her mother, Michelle, said that she was, “Super proud and very excited for her future and to see what it holds.” She also added that she was glad she would be able to continue her career on to the next level.

McCurley said that there were several qualities that made her choose McKendree over other schools. She mentioned their small class sizes and that they offered the major she was interested in pursuing. Her mother also added that she liked the coaching staff a lot and they made her feel at home.

McKendree University’s women’s volleyball team is currently 14-15 and 7-8 in their conference. They compete in the Great Lakes Valley Conference. The Nickie Sanlin coached Bearcats have had 5 consecutive winning seasons.

McCurley also said that she would like to thank, “my club coach Bob Vollmer, parents, and cousin who inspired me to play college volleyball because she did as well.”