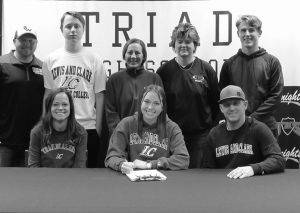 Dallas Zirkelbach is pictured above signing her national letter of intent. Her parents Jessie and Derek are seated next to her.

Zirkelbach is currently a senior at Triad High School and will play softball for Lewis and Clark College.

Her father said of the signing, “We’re just relieved to know where Dallas will be attending college. It is great to know that already.” He also stated that he was glad that she would be able to play at the next level.

Ronda Roberts is the head coach for Lewis and Clark’s softball program. The Trailblazers are a team that has dramatically improved over the last three years, going from 8 wins to 25. Their 25 wins last season put them just under a 0.500 winning percentage. The team competes in the Midwest Community College Athletic Conference.

When asked about why Lewis and Clark was the school chose, her father stated that, “The coaches made her feel at home. They made it clear from the start that they really wanted her on the team.”

During Zirkelbach’s career, Triad’s softball team has been very successful. The team has gone a combined 55-24, with her senior year yet to come. Last year the team won the MVC championship and advanced to the IHSA Regional Finals.